So, what now? Last Friday at about this time I was getting the cannula out after my final blast of carboplatin and taxol. Saturday and Sunday were steroid days. On Saturday I pruned ivy and carted piles of it out the back in the wheelbarrow, clearing bricks down the side of the shed along the way. That’s what steroids can do for you. On Sunday, my friend Dawn, who happens to be a nurse, drove up from Canberra to see me through my post-steroid crash on Monday and Tuesday. Only this time there wasn’t a crash. She came up with a novel idea: eat pain killers and anti-nausea tablets before the pain and nausea. Get in first, don’t wait until it all hits before you try to zap it. Seems obvious now, but it’s not how I’d been playing it. I’d be laid out on the couch, staring at the ceiling, enduring the day somehow and thinking, “I’d better take some tablets”. So this time I lined up the pills and ate all of them before the steroids even wore off. The next morning the oncoming train switched over to a set of parallel tracks; all I felt was the buffeting of the air as it went past. So I got through my bad days without feeling particularly bad. I’d expected to finish off my last chemo session with one last great wipe-out finale; it ended with a whimper. A wonderful whimper.

So, what happens now? I have been waiting for, yearning for, this moment. Treatment is finished. I don’t have to cower before the thought of the next chemo. I do have to go back for a CT scan on August 20, which will show whether the cancer has entirely vanished or if it has left a bit of itself lurking somewhere deep and hard to get at. And there’ll be endless follow-up tests. But right now, I believe it’s perfectly reasonable for me to celebrating the end of whatever the hell this last seven months was all about. FINISHED. HOOORAAAAAY!

But now what? My problem now is that I feel I’ve been given a life, a life that was looking horribly endangered just a few months ago, and I’m all at sea. Last birthday, Mum gave me a black and white photo of me as a baby, all plump with a great big white nappy. She also gave me one of the pink safety pins – a little rusted now – that held my nappies up. In the photo I’m bald and have a slightly baffled look on my face. I feel I’m back there – bald, baffled, now wearing a colostomy bag rather than a nappy. I’ve been given this new body, and the luxury of time. What do I with these things?

I don’t know. In the meantime I’m continuing to crochet as though my life depended on it. The crisis is over, but the granny squares are still piling up around me. I finish one and start on another, like a chain smoker. With all my new insights and experiences, I feel I should be living life on some sort of higher plane. I shouldn’t be wasting time. I should be living every moment in honour of the miracle of life. Which means I should be doing … what, exactly?

Meanwhile, Dawn is whipping up a sponge. I can leave Dawn to do the meaningful and life-changing thing today. This lets me off the hook (not the crochet hook, nothing is getting me off that). It’s well known among Dawn’s nearest and dearest that she’s not the most interested or skilled cook in the world. So the idea of Dawn whipping up a sponge has been a long-running joke. About a year ago, she said she’d actually do it one day just to surprise everyone’s socks off. She’d practice a few times and then say, casually, “Oh, I’ll just whip up a sponge” and then follow through. On Tuesday, when I was feeling unexpectedly not too bad, we went to the supermarket and bought all the things for a sponge, including a round sponge tin. But we forgot the caster sugar, and it felt too hard to go back out and get it, and in the end we didn’t do it. It was hard to watch her drive away, spongeless. But she promised to do it today (Thursday). I was dubious. Would she really follow through and make the sponge without me standing over her?

I think I was so interested in Dawn’s sponge because for her to make one is so out of character as to count as a major life event. She’s always been active in causes and committees and volunteer work – doing good in the world – but somewhat neglectful of the sponge-like little things in life. Somehow, if Dawn could make a sponge it would show that it’s possible to be different, even if just a little bit. 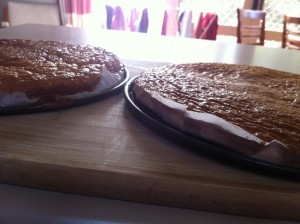 Anyway, today, Thursday, Dawn whipped up a sponge. She texted me a photo. She baked two sponges, so that one could be set upon the other and they could be joined together with strawberries and cream. The photo shows two flat objects. They didn’t rise. But I don’t care! She did it! I’m ridiculously pleased. I don’t know what to do with myself but it doesn’t matter, because Dawn has whipped up a sponge.

14 thoughts on “Whipping up a sponge”