Today’s blog is brought to you by the letter P, as they used to say on Sesame Street. P is for pancreas. Here’s my pancreas Before. 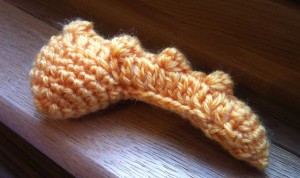 By now I’d meant to alter my suite of crocheted guts to explore how they’ve changed before and after my debulking surgery, but the pancreas is as far as I’ve got. Before surgery I’d crocheted it free-form, without a pattern, learning how to do the bobbly bits on YouTube. This morning I pulled out some of its stuffing, poked the tail in on itself and sewed it off with black wool. And here it is, After.

I’m scared of my pancreas. It apparently disgorges acids that can eat through soft tissue, and if threatened can cause diabetes or make it hard to digest fats (chips!). Pancreatic cancer can carry you off very quickly, as happened with our wonderful local Independent federal member of parliament, Peter Andren. In hospital, before my conclusive diagnosis, Professor P casually said he hoped it wasn’t pancreatic cancer because it wasn’t really treatable and I’d be better off with ovarian cancer. So I was suddenly, bizarrely, hoping like hell I had ovarian cancer. Now, I’m trying to make friends with the remains of my pancreas (Professor P chopped off its tail on May 13) but it’s a hard call. It feels like an angry animal that might turn on me if I relax.

P is also for Pink Pills for Pale People. And for Patricia, my childhood friend from Carnarvon, whose family used to run Fong’s Drapery. She turned up here in Bathurst on Monday, just as I was falling into the ghastliness of a post-surgery blast of chemo. Tricia was asking me if I remembered the day we went into a temporary antique store on Stuart Street, in what used to be an old boarding house, where I bought a tiny bottle stamped with the words Pink Pills for Pale People. I didn’t remember the shop, or the day, or the bottle. Nothing was surfacing from the memory banks, nothing at all. Tricia wondered if we still had the bottle in the family. I said Mum might still have it. Then I remembered that just a few weeks ago, Mum had given me boxes of shells, feathers, rocks, driftwood and old bottles for safekeeping until she was sorted in her new home. I looked over at my display cabinet and saw three tiny bottles. I walked over, picked one up, and there it was: Pink Pills for Pale People. 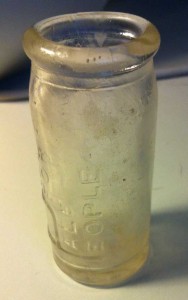 Yesterday morning, I was a very Pale Person. After a hot shower I was standing there in the bathroom dealing with my weird post-surgery abdomen when I started listing and the world went dark. I hung onto the wall to stay upright and then Steve helped me slide down, slowly, to a position sitting on the floor. I saw myself, bald and miserable on the bathroom tiles, and felt Pissed Off (there’s that letter P) that all this was happening and that it was happening to me. But I didn’t actually faint. After a few minutes, even without a pink pill, I felt my paleness lift. Tricia made tea and toast with Vegemite, which revived me quickly, and a community nurse turned up and took my blood pressure and pronounced me not too badly off considering. Later, we drove up to show Patricia Bathurst from the top of Mt Panorama, and I looked out at the late afternoon sunlight picking out the shapes of the town and felt Peaceful. Really.

16 thoughts on “Brought to you by the letter P”