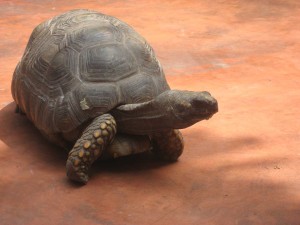 A carapace is a hard outer shell, as worn by tortoises and insects. A month out from surgery, I’m wondering if they took my carapace as well as my spleen, omentum and various other body parts. I realised I was missing my hard outer shell the other night while watching a David Attenborough program on insects. Normally I can watch, without flinching, a lion pounce on a gazelle and rip its throat out or a killer whale toss a seal in the air before eating it. I understand that nature is red in tooth and claw. But this time, with the insects, I was beside myself. A spider SUDDENLY pounces on another spider and SUCKS THE LIFE JUICE OUT OF IT. The violence! The terror! It was like watching a horror movie. I had to make myself keep watching. What am I, a complete pussy cat? I grew up around spiders. I have never screamed at a mouse or a cockroach. As a child I caught fish and gutted them, right there on the beach. So what’s with this fear and trembling? The next program was about D Day, the landing at Normandy. Twin brothers wading through the water facing a hail of German machine gun fire. Twin brothers! No! What about their mother? How can people send their sons to war?  Normally, a doco about the second world war goes into the “history” part of my brain. But this time the grief – the wreckage, the tragedy – was sinking straight into my heart.

And then there’s Parramatta Road, Sydney. A noisy, belching traffic sewer. As Steve and I drove out to Westmead for my post-surgery chemo, I felt alarmed and dismayed. Metal objects hurtling past each other at high speed! Soft human bodies strapped inside! We found ourselves following a young woman on a tiny scooter – a Vespa or something similar. A P plate was attached to the back. She was wearing a light camel-coloured jacket with a faux-fur collar, and her long honey-blonde hair was blowing around below her helmet. Despite the helmet she seemed unbearably unsafe, especially as giant trucks roared up beside her and cars zipped here and there in front of and behind her. Every time she stopped at the lights, she tucked her bare hands under her armpits to warm them. I was scared for her, watching anxiously, unable to take my eyes off her. How can we do this? I thought. How can we spend millions on high-tech medicine and yet send people out into these roads to be killed and maimed? She turned right and disappeared from view. I could relax a bit.

See? No carapace. No defences against the common-or-garden terrors of life.

Having said that, being in this vulnerable, newly-hatched state means that it’s not only the terror that sinks right in, but the joy as well. I can now spend minutes at a time – longer, half an hour – just sitting in one spot in a state of ridiculous joy. I’m alive! I have this day on earth! Look at the Labrador sitting in the sun under the clothesline! Can flowers be real? How can anything be that beautiful?

But you can’t get round in the world like this all the time. Unlike my spleen, I’m expecting my carapace to grow back, so I can once again step out of the front door and let things – cannibal spiders,  Parramatta Road, a vase of flowers – be ordinary again. 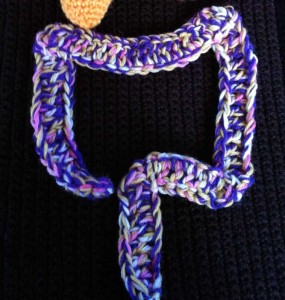 Okay, so it’s a month since surgery and I’m now willing to reveal something I’ve hinted at but not been explicit about. Before surgery, my large intestine was intact.

During surgery, they cut out a long section of it. To represent this, I unravelled the end of my crocheted large intestine. 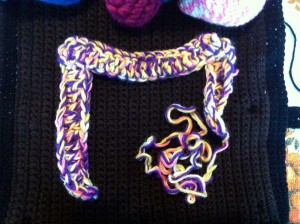 During surgery, Professor P and Dr B made a hole in my stomach just above and to the left of my belly button, and drew the new end of my intestine out of it. They sewed it off into a new portal to the outside world, called a stoma. (Note: Do not do a Google Images search on this word if you are at all squeamish.) 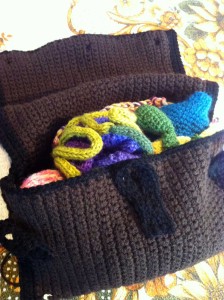 I’ve nearly finished a brown and black cushion that looks something like a satchel to hold my guts. It’ll sit innocently on the sofa like an ordinary cushion, but if a visitor should ask, I can unfurl it and tell the story.

I’ve remodelled the end of my intestine so it can be drawn through the cushion “skin” and fashioned into a little flower-like stoma. 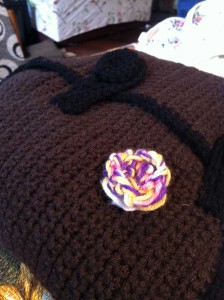 If one has a stoma, one needs a pouch. To get a supply of pouches (in New South Wales) one needs to sign up as a member of the Colostomy Association of New South Wales. Members are known as ostomates. Our newsletters and brochures feature pictures of kangaroos and koalas – animals with pouches. Yes, it’s a rigmarole and a bother to be an ostomate, but it’s a small price to pay for more life on earth, with all its terror and all its joy.

I took the pic of the tortoise at the Hotel Espana in Lima, Peru, when we were there in 2009. It was hanging out under the dining table.

11 thoughts on “Missing my carapace”