Angelina Jolie and me – our bodies have a lot in common. Okay, hers is taller, thinner, more symmetrical and generally more pleasant to look at, but down at a cellular level, we’re both carrying genetic material that has caused all manner of problems. Because Angelina is famous, and people were intrigued to discover she had voluntarily had her beautiful breasts removed, people have become aware of the BRCA1 gene. Because it’s associated with breast and ovarian cancer, people think it’s an evil gene. In fact, it’s the opposite. Apparently, we all have bits of code that tell cells to go forth and multiply. Go on, cells, take over the world! Then, to balance that out, we have a bit of genetic code that says, Hey, not so fast! You’re not helping! These “not so fast” bits of code are anti-tumour genes, and BRCA1 is one of them. The plot thickens when genes mutate. On a big-picture level, genetic mutation is a wonderful thing. It’s how we got out of the primordial slime to live a comfy life on land. But at an individual level, it can have disappointing results.

Okay, I just spent the last 15 minutes Googling evolution and the BRCA1 gene. Because the onset of cancers is usually at over age 40, women through the ages have been living long enough to have children, but dying before they could become grandmothers. If evolution is about survival of the fittest, how could that have been useful? In my thorough 15-minute scholarly study, I’ve found two possible evolutionary advantages that counteract the disadvantages: the mutation has also been associated with increased fertility and increased lactation. So, lots of babies combined with early death combines to create a nice bit of evolutionary equilibrium. Great. 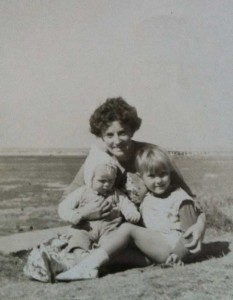 Going back to the experience of individuals – I think of all those female ancestors on my father’s side, going back through the generations, who would have suffered and died as a result of this unwelcome inheritance. And what psychological effect did this have on their families, to be losing mothers and grandmothers in their 40s and 50s? This is a picture of my Aunty Joyce and her children, my cousins Sandra and Sharon. All three inherited the BRCA1 gene mutation. Sharon died of ovarian cancer in her early 40s; the other two have survived breast cancer. Sandra’s daughter Becky has the gene mutation and Becky’s daughter Maddie doesn’t know yet, because she only a small child. It would appear the mutation came down the line to me like this: from Francis William Sorensen to his children Brian (my Dad) and Joyce (aunt). From Dad to both his daughters, Deb and me. Deb has had breast cancer (all clear now) and I’m working my way through treatment for primary peritoneal cancer, the lucky door-prize variant of ovarian cancer that you can still get even if you no longer have ovaries (because you’ve had them removed to avoid ovarian cancer). 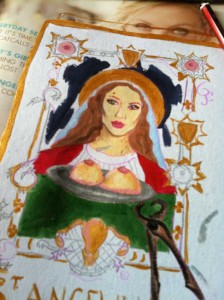 Anyway, back to Angelina. As discussed in earlier posts, I’m working on a Waste to Art exhibition entry in which I pulp and recycle old journals, creating new stories from the raw material of the old. I’ve been working on a page called Saint Angelina, a riff on Saint Agatha, who was tortured by having her breasts pinched off with a set of tongs. Agatha is traditionally pictured holding her severed breasts on a plate. I overlaid images of Angelina and St Agatha in Photoshop, printed out the composite image, traced it using a Hobbytex transfer pencil, and ironed it on to my recycled paper. I couldn’t really be bothered with the intricacy of the medieval border (and my paintbrush was annoyingly splayed) so it’s a bit of a mess. Will keep working on it. I was going to stick to ordinary old blue, black and red biros (to reference the way my original journal was written) but my friend Karen Golland encouraged me to load on the colour and this is much more enjoyable.

Good causes news flash
My dear friend Julia Manning is going to ride from Sydney to Surfers Paradise to raise money for Youth Off the Streets organised by the Rotary Club of Engadine. You can sponsor her at this link. Click through using the following path: Make a Donation – Give a One Off Donation – Enter your Amount – Don’t use My Giving – Donation in your name – Donation is made in support of cyclist Julia Manning.

4 thoughts on “Angelina, Auntie Joyce and me”