Ghastly. Hideous. I made myself get up off the couch to write just two or three sentences. Now that I’ve completed them I’m free to go back to the couch. But I’m here now, so I may as well do a few more. Had my third chemo session on Monday, followed by two days of being gloriously pumped up on steroids, during which I pottered manically around the house doing things. Not sure what, now. I know I ended up with a box of mixed sequins that I sorted into separate colours. By lunch time today the steroids were wearing off and I was back into the now-familiar searing pain in ankles, knees, hips, wrists. Hey, bearing in mind the reason for this holiday, what does that remind you of? Yup. I found myself lying on the couch reading Wikipedia on the iPhone, about the medical interpretation of death by crucifixion. Very interesting. Now I’m just waiting for Sunday (or before, would be nice), when I can ascend from the couch. Actually, just before the steroids wore off today, I did manage to do some good in the world: I took some pompons down to the burnt church on the corner and did a tiny bit of yarnbombing. I decorated around the edges of the hand-written sign that says, “The fete will STILL BE HERE on April 26.” (I shouldn’t be mentioning this – true yarnbombing is anonymous.)

In the meantime I’ve been inspired by Helen and Ray’s rabbit Mimi, who was found paralysed a couple of weeks ago but refused to give up the ghost. She’s now lurching around the house. “Every day she makes tiny improvements,” says Helen. 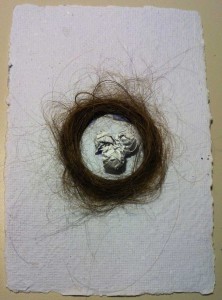 And to continue my semi-delirious Easter theme, here’s another panel from my Waste to Art entry. It’s my fallen hair with bits of scrunched-up paper from an old journal. A crown of thorns becomes a nest with eggs in it.