It’s all about the numbers. My third chemo session is scheduled for next Tuesday, but I doubt it’s going to happen, because my numbers aren’t any good. I’m getting wise to the system. My platelets are 51 (normal is 150-400) and my neutrophils are 0.23 (normal is 2-7). The neutrophils are particularly worrying because they fight infection, so at the moment I’m avoiding public places – anywhere people are likely to be sneezing or snuffling. I’d been feeling fabulous for a week, swanning around in my Look Good Feel Better wigs and makeup, but at lunch time today I felt something start to unravel. That everything-is-too-much-trouble feeling came back. This is, apparently, my nadir. For me, the word nadir suggests despair, hopelessness, darkest moments. But for my nurses it just means “lowest blood count after chemotherapy”. It’s one of those words I’d read but never heard anyone say. I have discovered it’s pronounced nay-deer.

During my feeling-fab week, I went along to a talk by Ray Mjadwesch about kangaroos in a brown wig and hat (I was in the brown wig and hat, not the kangaroos). Kangaroos have been heavily under discussion here in Bathurst, with renewed calls for the kangaroos of Mount Panorama to be shot to keep them off the race track during the V8 car race in October. Kangaroos are said to be in “plague proportions” at the moment, and some residents living near the mountain are said to be anxious about being bashed up by the big bucks. Ecologist Ray Mjadwesch has joined the debate on the side of the kangaroos. In his presentation at the bowling club last Sunday he argued that contrary to the common perception that kangaroo numbers had “exploded” since the arrival of European farming methods (turning swathes of bush into wheat fields to nibble), kangaroo numbers across Australia had actually declined precipitously.

In the nineteenth century, their numbers were deliberately driven down by great culling drives. The process of herding kangaroos into a high-walled corral and killing them in their hundreds – using guns, cudgels, swords and spears – was known as a battue. People would gather from miles around to enjoy the spectacle.

Today, argued Ray, the idea that kangaroo numbers are “exploding”, requiring culling, continues. A key beneficiary of this narrative is the kangaroo meat industry which relies on a steady supply for a growing export market. In New South Wales, the quota for commercial culling is set according to surveys of kangaroo numbers. These surveys are carried out by means of fly-over observations. Ray argued that the numbers were flawed, because the fly-overs emphasised national park areas, where kangaroo numbers are relatively high, rather than focusing on agricultural areas, where kangaroo numbers are relatively low. He said the commercial kangaroo industry was facing declining numbers in far western New South Wales, “so they’re coming into this region.”

But back to Bathurst and the car race. Thinking about it afterwards, I’m not sure whether we really need to worry about kangaroo numbers on Mount Panorama. If we just build a kangaroo-proof fence all the way around the track then surely that will solve the problem? Meanwhile, here’s my YouTube clip from 2009 showing Ray taking a dead kangaroo up to the council chambers in protest against the 2009 pre-race cull. And here’s a link to Ray’s nomination of kangaroos as a threatened species under the NSW Threatened Species Conservation Act 1995. So, are kangaroo numbers exploding or heading for their nadir? I don’t know, but I certainly think Ray’s critique of kangaroo-counting methodology in New South Wales is worth further investigation.

The other thing I was working on pre-nadir (by the way, my blood counts should start rising again by early next week – they did last time) was my Waste-to-Art exhibition entry. As discussed in previous posts, I’ve been getting rid of years of mental junk mail contained in a pile of exercise books – old journals – mostly by burning them but also by pulping and recycling the paper. I’m planning to create an entry called “Spilling my guts” in which the paper recycled from my old journals is used to tell a new story in pictures and words – about my threatened guts. Here’s some pics of work in progress. 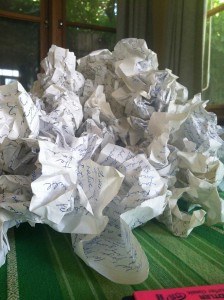 Ready for consigning to the flames… 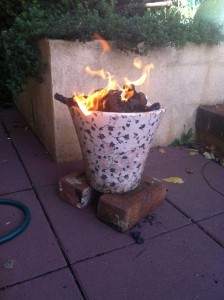 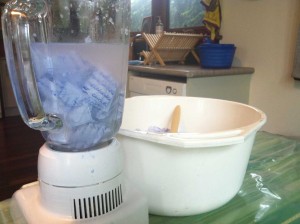 Or maybe soaking and pulping… 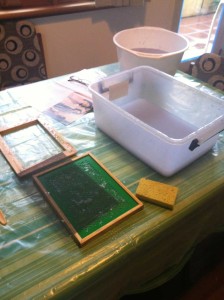 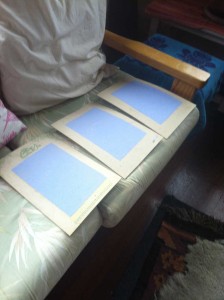 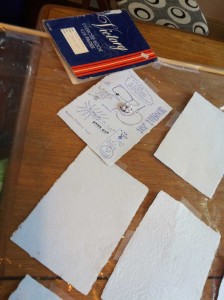 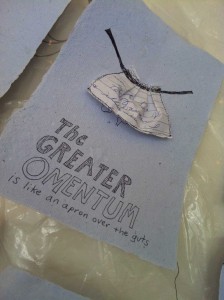 Detail: The omentum. The omentum hangs like an apron from the bottom of stomach and over the intestines. I’m quite likely to lose my omentum during surgery planned to take place after my third chemo session. Goodbye omentum; I hardly knew you. 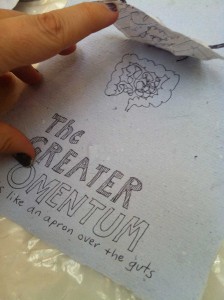 Lifting the apron to reveal the guts underneath.

I’ve been restricting myself to red and blue biro – the same as those used to write my original journal entries. But I’m longing for a bit of colour. I’m feeling the need to jazz it all up, so I just might.