It was dark and I was lying flat on my back on a mattress in a moving van. Out of the window, all I could see was the dark sky, and power lines and the tops of trees. The van was a camper van and we were being transported through the streets of Melbourne to an address in Coburg. It was mysterious and tiny. It was a capsule for living in, going camping in, sleeping in. 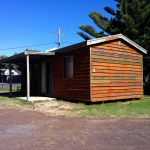 Cabin No. 4 at the holiday park in Port Campbell, Victoria.

Steve and I got back from our two-week holiday along the Great Ocean Road on Sunday. Until the last three nights in Melbourne, where we had urban experiences, we were camping in a tent and living in holiday cabins. All tiny houses. Tiny houses are, like kale and beards, a Thing. You can see them in hipster corners of the Internet in all their Tiny stylishness. Really, they’re just another riff on cubby house or caravan, but now they’re being promoted as a way to live lightly on this earth, not taking up too much space. Instead of a giant McMansion that you have to burn truckloads of coal to heat and cool, you can live in a mini-home that you can heat with a candle and cool with an icy pole.

As a short person, I love them. 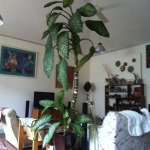 If you take your eyes off it, it grows.

I love the way everything in a caravan or holiday cabin is in easy reach. Here, in my own house, I have to get up on a stepladder to reach the blender. The sink and kitchen benches are just a tiny bit too high, making me feel like a toddler at a hand basin. My face is at the very bottom of the bathroom mirror. Even my pot plant, getting in on the act, has gone for giantism, nearly reaching the extra-high ceiling that everyone admires (they admire both the ceiling and the pot-plant, although some find the plant a bit scary). When we book into holiday parks, I’m usually hoping they’ve got a small ’70s caravan out the back that we can have, preferably complete with orange and brown curtains. When I was five we lived our first months in Carnarvon at Baxter’s caravan park. Mum set up her sewing machine in that tiny space. Everyone had an annexe. A lot of people lived there permanently.

As I walked along the beach at Blanket Bay in the Great Otway National Park on the Great Ocean Road, I crunched over some tiny homes. They were tiny grey shells, the shape of a soft-serve ice cream, with tiny snails in them. They inhabited shallow pools of sea water on the rocks. They moved slowly from here to there, sucking at the sand on the bottom, creating beautiful patterned trails, some ended forever by my Goretex boot. Crunch. Sorry.

As I walked along the beach, I scribbled cosmic thoughts on a scrap of lined paper:

The universe unravels and knits something else.

Too, too, too beautiful! I almost don’t want to see it. I’m not alone. I’m not homeless. I’m held in the universe.

The ocean is working as hard as it ever was. I’m Alive. This moment is life. There’s no break between rock and limpet.

There are just outbreaks of energy. “Just.” Stars explode. Just another outbreak of energy. There is no illness, no death. Just a suck back, like a wave, breathing out, crashing against the shore.

Later, back in the tent, I was reading my iPhone 4 (reception was surprisingly good) and came across an article about the work of young physicist Jeremy England, who has come up with a theory about the origin of life being in the dissipation of energy, and how the theory of dissipation applies to living and non-living things. The important thing is not “life” as such, but how systems cope with energy. As usual, I had that fabulous feeling of almost-but-not-quiteness I get around ideas that feel right but about which I know next to nothing.

But I do think that we “have” this planet earth in the same way as the blue periwinkle “has” its tiny shell home. The periwinkle both has a home and is its home, made of stuff that is living and non-living. And it is fragile. Just like our planet, a tiny home in a vast universe.

4 thoughts on “Living in a tiny house”