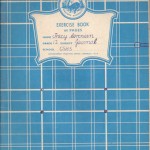 An archaeologist. That was the first thing I remember saying I wanted to be, when the teacher asked the primary school class what we’d like to be. Other ideas around the class were air hostess and astronaut. Interesting … I’ve just noticed that all these coveted careers start with the letter A.

But by the time I was nine, I wanted to be a writer. It was then that I wrote a long – I would say impressively long – story about going right out the back, away from the house, as far as the second levee bank, and finding a lump of wood. I lifted this lump and there was a hole. I went down the hole (could have been inspired by Alice) and came out in another dimension. Somehow I was suddenly in outer space. I had a few adventures out there, came back out of the hole, repositioned the lump of wood, and thence home.

I started keeping a journal when I was eleven. I wrote it in a school exercise book. When I filled it, I started another. I now have cardboard boxes full of exercise books full of bleating. (When I talk to myself, I tend to bleat.)

In high school I intuited that I might be seen as a wanker if I said I wanted to be a writer, so I went for something nearby, which was journalism. Which is basically what I ended up doing, once I realised I needed a proper job. That, and community arts, which was also nearby in the sense that it was creative and it involved a lot of writing (of grant applications). And video script writing. That kind of flowed out of the community arts stuff. And making videos. That flowed out of the script writing. All of which paid some bills but was never the thing I got so excited about at nine, when I wrote myself into outer space and got myself home safely in time for dinner.

And then, last year, I got extremely ill and thought drat, I never really pursued that writing thing. Not properly.

Okay, that’s the end of this blog post. Thanks to Twitter followers @RoseyChang and @Lynsm7 for suggesting this topic. I Tweeted that I needed a suggestion for my blog post tonight, and they tweeted “When I was growing up, I wanted to be a …” and “there’s a book in everyone” respectively.