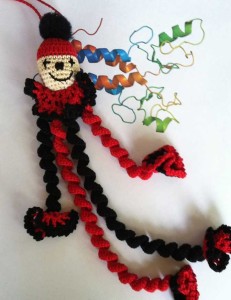 My faulty BRCA1 gene is tucked away on chromosome 17. (This is slightly spooky because my birthday falls on the 17th of the month and my house is number 17.) Passed down through the generations, lived with for decades, it finally knocked me over earlier this year. Last week, when I found this picture of the protein that makes up the gene, all I could see was a potential crochet project. The curly bits reminded me of the curly clowns Aunty Janice has sent through the years, starting in the mid ’70s. This red and black guy is one of the early ones. 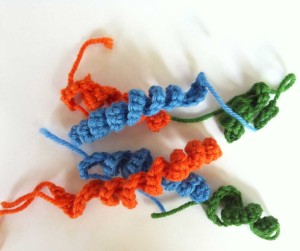 This morning I decided to follow through and see if I could crochet the BRCA1 gene. The curly bits just needed a bit of hyperbolic crochet (my fave) and the strands between each curly bit were created out of the tails at the ends. As I worked, I tuned in to the idea that I was making a part of my own body, building something the way nature builds things. I wondered about whether my crochet was being constructed using the same interplay of forces that created the structures of protein themselves: hyperbolic crochet forces the yarn to curl back on itself because it is trying to relax while the addition of extra stitches is pulling it tight. I was influenced in this by a beautiful video clip sent to me by my friend Jane. Here, fibre artist Renate Hiller speaks of how working with yarn so often replicates the forms found in nature, especially the spiral.

At the Jenolan Caves a couple of weekends ago my friend Lou and I looked at how the stalactites hung down, drawn down by gravity. Stalactites are made when one tiny drop of water leaves a deposit, and the next, and the next. We also saw some strange little guys (helictites) that did not hang down but poked straight out, or even curved upwards out of the rocky side of the cave. Our guide told us that science did not yet have an explanation for this. Somehow, just like hyperbolic crochet, the force of dropping is being countered by a force of tension, causing curliness

After our trip to the caves, Lou showed me some YouTube clips about cymatics, the study of patterns made by sound waves. Lou said she’d heard somewhere that maybe it was sound that gave rise to life in the first place, by organising things into patterns. It’s nice to have conversations like these, where you deliberately try to blow your own mind.

9 thoughts on “The curly clown and chromosome 17”