I’m writing this with Australia batting against India in the background. Steve is standing behind the sofa watching, making “ooff” sounds, which is what he does when watching any sort of sport, whenever there is a significant movement.

On New Year’s Eve at Fiona Green’s place I found myself saying that this year I’d learn the rules of cricket. It’s weird when you hear yourself say something surprising. Where the hell did that come from? I can only guess it had something to do with Dad, who might have been hovering around in spirit – drinks and a big bonfire in a backyard could easily have attracted him. Dad always played and watched cricket and I always sidestepped it because to be honest it always seemed deadly boring to me. Men in white clothes standing solemnly around in the belting sun; the occasional flurry followed by more standing around. My evasion became a lifelong habit. But Steve likes to watch the cricket and when he does, there’s an echo of earlier times. And now I feel slightly bad about living through all these Australian summers and still not knowing the rules of cricket. So I’m going to give it a go. This will not be easy. I will have to fight a strong desire to immediately do something else. Like maybe arranging crockery shards by colour or size, in anticipation of one day making a mosaic table top. Or sorting old photos into albums. Rules of cricket. Why did I say that?

When I sat down to write this I was distracted by the cricket. What I was really going to write about to today was Purple Day! Today is international epilepsy awareness day. Epilepsy makes the brain fire off in all directions, leading to fits and seizures. My little nephew Joey succumbed just after his third birthday with a particularly nasty form of the disease, the Doose syndrome, which is resistant to medication. He was having twenty or more seizures a day. These involved sudden “drops” or “flops” to the floor. He’d be conscious again immediately, and sometimes crying because on the way down he might have hit something hard like the edge of a coffee table or a concrete birdbath. So he took to wearing a blue helmet. At the end of 2013, a few months after Dad died, things got so bad that he 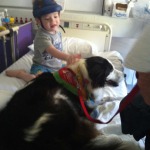 Joey with Hazel the therapy dog.

ended up in Sydney Children’s hospital for a long stretch. I remember going to see him there when he was visited by Hazel the therapy dog. I also went upstairs with him and Deb for one of his brain tests. His little scalp had electrodes taped all over it. And he was well and truly over it. Sick of all this crap going on. The good news is that a few weeks later, the seizures had stopped. He got all the way through last year, his first year at school, seizure free! Did the medication combo finally hit the right spot? Had he simply grown out of it? Nobody really knows. Today, in honour of Joey, I’ve purpled up my Facebook profile picture and I’m writing these paragraphs in this blog.

Meanwhile, at the end of 2013, I wasn’t feeling that crash-hot myself. It turned out to be primary peritoneal cancer, a variation on ovarian cancer, explored at great length here in this blog. The awareness ribbon for this is teal. Shortly before that, Mum got in on the illness act with a spot of bowel cancer, which thankfully was removed all in one go in one operation, and she didn’t have to have chemo or any further treatments. Now, what colour is the awareness ribbon for bowel cancer? Could it be …. brown? Surely not. Must Google it. Back in a moment.

Wow. There are a lot of awareness ribbons. I guess there’s a lot to be aware of. “Use the search box to find your illness or cause”. Okay. Looks like blue or periwinkle covers the bowel. But using the search term “colon” does in fact bring up a brown ribbon! Speaking of bowel cancer, an ex boyfriend has been diagnosed with it, and is in for a long and involved treatment regime. Thinking of you (while not breaking your anonymity here!)

After Deb got breast cancer (pink ribbon, everyone knows that) and Joey started having seizures and Dad died of pulmonary fibrosis and Mum got bowel cancer and before I was diagnosed with ovarian cancer, Deb did say, at one point, “What were we in a past life? Axe murderers?” We don’t subscribe to deserved illness theory any more than we subscribe to the deserved good fortune theory. But there are moments that make you wonder. Anyway, we’ve almost got a rainbow of ribbons, just in one family, and all just in the past few years. Before that we’d had a very good run.

Which brings me, finally, to the green ribbon, or should I say Greens ribbon, that I’ll be wearing on Saturday, the day of the New South Wales state election. I’m not a member, but I’m happy to support the local candidate, Tracey Carpenter, who has been running a very serious and successful campaign. It’s actually not that hard being green, if you’re able to steel yourself against the waves of warmings and extinctions, fracking and fossil fuel-burning. I’ve been doing a spot of handing out how to vote cards at the pre-polling booth in Bathurst. A couple of weeks ago I went along with Tracey when she drove up to Rylstone in the north of the Bathurst electorate to meet and greet at the annual Rylstone-Kandos show. With iPhone in hand, I spontaneously decided to record her talking about her policies, as she drove. Here it is: