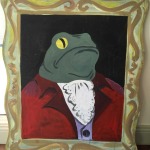 I’ve been off on a minor amphibian journey over the past few days. Poking around at the Junktion next to the tip in Bathurst, where you can dump stuff that deserves a second chance before going into landfill, I found a toad. It’s a painting of a rather magnificent toad, or perhaps frog, in the garb of a nineteenth century gentleman in a faux gilt frame. He’ll be just perfect in the 200 Plants and Animals exhibition in October. The exhibition will be a showcase of local, Bathurstian plants and animals, so this guy will need a makeover to take him out of generic frog/toadness into a specific local species. After a little Facebook consultation with local ecologists, I settled on turning him into a smooth toadlet (Uperoleia laevigata). He looks pretty smooth.

This guy is not a true toad. Australia, I’m told, has no true native toads, although we have a lot of frogs that are called “toadlets”. They’re all just frogs, really. So, what’s the difference between a frog and a toad? Apparently a toad has dry skin, a stumpy body and small legs; frogs have slippery bodies, narrow waists and big muscly thighs, good for jumping.

We may not have native toads but we do, of course, have cane toads, famously and disastrously introduced to eat up the beetles that were eating up the sugar cane crops. They made their way up through Northern Queensland, across the Northern Territory and are now marching through the north of Western Australia, wreaking havoc. The western Australian government’s has a 42 point action strategy for combating them. I just had a glance down the list. It’s all about stakeholder engagement and databases but reading between the lines, it’s all about one thing: Kill them.

Speaking of toads, I spent a frustrating hour or so (way too long!) trying to get to the bottom of the famous advice about eating a toad first thing every morning, because after that, nothing in your day will be quite as disgusting; everything else will be a cinch by comparison. The idea has been attributed to Mark Twain and Schopenhauer but it appears to have come originally from Nicolas Chamfort. I had no need for a toad breakfast today. I enjoyed the almost-spring sunshine and went for a swim. I did some frog-kick.

Meanwhile, Mum has agreed to create a portrait of the pobblebonk frog. Here’s one making its characteristic “bonk” sound. Apparently it’s only the males that make this noise, and they make it because they’d like to – bonk. (I’m sure the name comes from the sound rather than the intention.) Here’s one now: