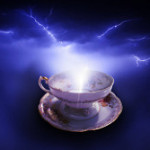 If you’re following along on this blog, you’ll know that last week I went to a function in town, got the shits with one small aspect of it, and wrote this blog post. The innocent victims of this then fought back in the comments. In the grand scheme of things this was all very tiny, but it was my teacup, my storm. I went on about it to my partner and friends. What did it all mean? Was I being mean? Were they being mean?

I kept trying to say, “I’m looking for the meaning, I’m not trying to be mean,” and they kept saying, “You’ve got the wrong meaning, and you are being mean.” Communication failure!

We live in a world of intentional and unintentional meanings. On one level, I have been a racist person today. I have not left the house; I’ve barely spoken to anyone. So how can I be racist? Well, I’m in a house on a plot of land that my partner and I own. We’ve got the key to the door. If a stranger wanders in off the street I have every right to shout at them or call the cops. All this is normal and ordinary. This natural ordinariness is the sort of truth I need to live in, today, for practical reasons.

But there’s another truth about what I’m doing here, on this bit of land. A couple of hundred years ago this block belonged to the Wiradyuri nation, or, to put it the way they often put it – they belonged to this piece of land. Today, there are Wiradyuri people who live in rented houses in Kelso; some are homeless. But because of our racist history I’m the one who owns this block, not them. I get to say who comes in and out. I didn’t personally create this situation. I’m also not going to give up my privilege. I’m going to keep living here, keep locking the door, keeping treating the place as if I own it.

My intention for today is to hang out inside the house, working from home. But another, extra layer of meaning (out of many) is that I’m living the privilege of a white person in Australia. Perhaps it’s a bit much to say I’m “being racist” but I think it’s true to say that I’m benefiting from, and perhaps in some way perpetuating, the racism in our culture.

The British decided to declare the land terra nullius – belonging to no-one – so that they could seize land without feeling like criminals.  If “nobody” owned it, then it was there for the taking. Finders keepers. The downside of this is that Aboriginal people were made to feel like nobodies. Racism comes in to support the threadbare logic of occupation and theft.

It’s not nice to think about this. It’s much easier to forget about history and just live in each day as it comes. But Aboriginal people – just by being here, just by walking down the street, passing me as I do my shopping – remind me that there are other layers of meaning embedded in my ordinary day. And they’re not just trivial layers of meaning. They’re about who we are and what we are striving to be. This is what I was trying to say about the marital arts demonstration. There’s intention, and there’s meaning. They’re different things. There are always lots of possible meanings, depending on your perspective.

After a day agonising over my martial arts storm in a tea cup, I decided to forget the lot of it and just watch Brad Pitt’s zombie film, World War Z. But my brain wouldn’t shut down that easily. Brad says goodbye to his family when he goes off to fight the zombies. He cuddles the little girl and says words along the lines of she’s a precious thing. He high-fives the little boy and says, “Look after the women.” This includes the adult woman who is twice the boy’s size. He’s nine, but he’s the man of the house! Arrgh! Somebody please EAT MY BRAINS.

Culture chases me wherever I go. I can’t not see. I’m constantly mulling over how we are all part of a culture that perpetuates racism and sexism and environmental destruction – even when we’re just doing our thing, even when we’re just trying to fight the zombies or spend the day in the house. We perpetuate racism and sexism not because we’re bad, or because we mean to, but because we’re caught up in history and culture. By becoming more aware of this, we might be able to change how we do things in the future. That’s my hope, anyway.

So, back to communication, to failures of communication. My commenters thought I was being unjustly mean; I felt they were failing to get my point. It was a disagreement about the meaning of an event and we all had feelings about it. I can’t “unfeel” what I felt at the time; they can’t “unfeel” their response to my feeling.

This brings me to the interesting question of audience.

Who is this blog for? Who is reading it? My audience is mostly family and friends – people who know me personally. (Average readership is in the dozens.) But it’s not a secret or protected blog; it’s public. In its own way, it’s also part of “the media”. With that, comes all sorts of other responsibilities. When I wrote my post last week, I was not imagining – or perhaps I was forgetting – that the young people in the demonstration might also read it. If I’d been addressing them directly, I might have expressed myself differently. Instead, I was addressing my “usual” audience …  which is what, exactly? You. You reading this, whoever you are. Sometimes I think I know you; sometimes you’re a mystery.

As the host of this blog, I can go under the hood and have a look at my statistics. I can see how many subscribers I’ve got, how many people read a particular post. I can see which posts get read over and over again and which barely get a look-in. I can see the search terms people use before they stumble upon my blog (I love this one, for example: “what to do with galah when it has tumour in its bottom”). I know who some of you are but many of you are a complete mystery.

That’s how this Internet and social media thing works. Something can go from a semi-private discussion to global controversy in two seconds flat. Context goes out the window. It’s like sitting in a booth in a cafe having a deep and meaningful conversation, forgetting that the people at the next table can hear everything you say. And might be tweeting it.

Was my blog post capable of doing actual harm to a group of teenagers innocently doing their thing? Are hurt feelings harm? In the end, I decided not to delete my post. It was a review of a public performance; it was not a positive review, but that’s in the nature of review. I reviewed it from my own perspective, which was not the same as their perspective. But they had space to reply to me and to defend themselves in the comments. So I decided to let it all stand: my original post, my update after a personal discussion over the phone; the comments. People can make of it what they will.