With the world going to hell in a handbasket*, I walked out into the sunshine on Torch Street and headed for Milltown Park, the tiny scrap of green at the top of the street with some play equipment and a sign. Overnight, Milltown Park had become a Pokémon Stop, and I wanted to know a little more about it. I was delayed in getting there because about three houses down, my phone began to vibrate, announcing the presence of a crab-like creature on the road, a little virtual pocket monster. I had to stop and shoot it! I flicked the red ball at the bottom of my phone in the crab’s general direction. Ridiculously easily, my ball felled the creature and swallowed it up. The crab-thing was now mine. 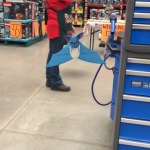 Today I’ve been gathering Pokémon and feathering my real-life nest with some cosy winter pillows and cushions. Other than the deliberate excursion to Milltown Park, I’ve been able to catch my Pokémon seamlessly, without going out of my way. In Bunnings, as Steve bought an aluminium set square and mulled over how he might custom-build some bookshelves in the middle room, I found a bat flapping about at head-height near a Bunnings customer service person. I was the only person aware of and reacting to this purple bat; it was like being the only person able to see a ghost. I flicked my red ball at it. It bounced fruitlessly down the concrete aisle and disappeared from view. I tried flicking my red ball in different ways, from different angles. I took a few steps backwards to get the angle right, taking care not to knock over the hardware stacked on a display stand behind me. It took a few more goes, but I got my bat. I pocketed my pocket monster.

As we went about our day, feathering our nest, Steve and I talked about how augmented reality could be a wonderful way to get to know local layers of meaning not visible to the naked eye: historical facts about a building; pictures of insects that live in a particular tree. Point your phone at things and find out more about them. That could be good.

Next stop Spotlight to buy some fabric for new cushions. As I walked across the vast expanse of asphalt that is the car park at this new bulky goods retail paradise, I whipped out my phone to see if there were any Pokémon hereabouts. Nothing. The carpark and all the world around it were Pokémon free. I looked up at the buildings, the cars, quietly sitting in the sun and realised I was already seeing the world in a new way: a space that was now somehow negative, because of the absence of something. The absence of something that didn’t actually (or yet) exist. And yet the absence itself felt kind of real.

Within a very short amount of time, the world has been blessed in some parts with Pokémon fairy dust and left languishing in Pokémon black spots in others. Why was the bat in Bunnings? Did Bunnings ask it in, as bait? If people come into your store hunting Pokémon, presumably their eyes might also be caught by the tangible objects available for sale. However these decisions are being made – or whatever algorithm is making decisions for us – for now, Bathurst Bunnings is a have, and Bathurst Spotlight is a have-not, in this brave new augmented world.

Yup, Brave New World. While developers and gamers have been tinkering with augmented reality for many years, there is something decisive about the release of Pokémon Go. Unlike earlier projects, this is fun for all the family. I suspect reality may never be quite the same again, just as it was never the same again after the telegraph, or radio, or television, or the Internet (or fire, or the wheel).

But in the meantime, glitches.

Later, with Steve, I took my old flesh-and-blood black Labrador to the Blayney Road Common for a gentle walk. Bertie ignored the kangaroos solem 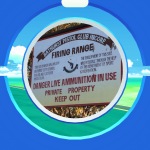 nly watching us in the golden light. I fired up my app. No Pokémon hereabouts, but I could see a Pokémon stop in the virtual distance. Ah. I tapped it and discovered that this PokeStop had attached itself to a real-world sign that says DANGER LIVE AMMUNITION IN USE – KEEP OUT. I was beginning to see how quickly this Pokémon Go thing could end up in tears. Having children shimmying the fence to get closer to the PokeStop in the middle of the local rifle range can’t be right. There is something eager and ignorant about Pokémon Go. It’s as oblivious to local sensitivities as the tourist who wanders into the Balinese Hindu temple in a bathing suit, tracking sand.

The game will either learn how to work this stuff out, or risk being banned like the clackers. The clackers were acrylic balls on the end of nylon string that you’d clack together. They were a fad that took over my primary school one year back in the early 1970s. The concrete corridors reverberated to the clacking sound. Kids were soon sporting great lumps on their foreheads where they’d been struck in the face by fast-moving hard plastic balls. The school banned them and suddenly they were gone.

Whether Pokémon Go is banned like the clackers or irons out its glitches to spread the fairy dust over the smartphone wielding world, one thing is certain: the way we inhabit physical space and tell stories about it is changing decisively. Robotic surgery means that surgeon and patient need not be in the same place, although at this point in evolution they still need to inhabit the same parcel of time (although even this could conceivably change, with a piece of surgery programmed in and the patient settling herself on the trolley at her own convenience to go under the knife). There was a woman on TV the other night with cerebral palsy who was playing a musical instrument just by moving her eyes.

At moments like these there’s a sense that the limitations of our human bodies are being swept away, allowing us to enter some sort of cyborg otherworld that is part flesh, part code.

I’m happy to catch some Pokémon on a Saturday morning, but I’m not sure I like where we’re going with all this, even if it’s bristling with benefits. I feel a bit like Rose R., the woman in Oliver Sacks’ Awakenings, who didn’t really like the world of the 1960s, with its blathering radio and television sets. She preferred her earlier, simpler world of person-to-person connection. Sometimes I’m not sure I really want to take these next steps, whatever they are. To take those steps is to enter a world with an operating system incompatible with the one currently installed in my brain.

It’s friendly and fun but we’re also being colonised. My street, my town, the way I move about in space is being tracked and manipulated; layers of meaning are being added from some remote place (company headquarters are in San Francisco) by people who can’t tell a firing range from a park bench, because it’s all just coordinates to them (or their robots).

I have some pocket monsters in my smart phone. They exist in my mind, and they exist in this nebulous thing called the Internet. They’re sitting out there in Torch Street right now, nebulous creatures waiting for children to find them. But these pillows – you can touch them, you can rest your head on them. You can count on a pillow.

And when I go to sleep tonight, I must resist the urge to slip my phone under my pillow and wake at three am to check on my pocket monsters.

*A man driving a truck through a crowd watching the fireworks; attempted military coup in Turkey; others.