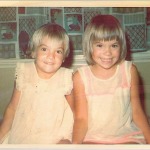 My first memories of Deb are sketchy.

My Pop hands me a doll. We seem to be high on a balcony. Decades later Mum and I work out that this could be a memory of the day Deb was born. The balcony might have been at the Mater hospital in Brisbane. I can’t have been more than 22 months old because that’s how old I was when Deb joined us.

And then there’s Deb in a cot, and me standing next to it with chocolate cake in my hand. I divide up the cake, some for Deb, some for me. I give her the cakey bit and keep the icing for myself. I was only two and a half years old but I already understood that she had no idea she was being diddled. I remember that actual wicked thought.

And then Deb was my companion all through childhood. And the decades rolled by and one day, on the phone, Deb said she had bad news and I immediately thought something must have happened with Dad. But it was about Deb herself. She had breast cancer.

That was five years ago. Since then, we’ve both discovered we’re carriers of the BRCA1 gene mutation and I’ve joined her in the cancer trip, only mine was of the ovaries, which is generally considered to be the nastier straw to draw.

As I’ve documented elsewhere on this blog, the BRCA1 gene mutation is a horrible piece of work. When I was in Tasmania earlier this year, I saw a poignant drawing by Melbourne artist Cassandra Laing on the wall at the MONA museum. The drawing is of a photograph of two young girls beside a dead and tagged bird lying on its back. The title is “Darwin’s Girls” and it’s about Laing’s own inherited predisposition to breast cancer. Mutation allows evolution. It’s through the infinite possibilities, the trillions of “mistakes” made in the genetic code, that species evolve and become more robust. Meanwhile, the same process can cause all sorts of grief for individual families.

Both Cassandra Laing and her older sister Amanda died early – in their late thirties – of breast cancer.

Fortunately, Deb and I are now in the clear. On Sunday, October 25, Deb is going to take part in the Seven Bridges Walk to raise money for the Cancer Council. It’ll be a 27 kilometre walk around part of the spectacular Sydney Harbour. I can’t go myself because I’m already committed to the Plants and Animals exhibition here in Bathurst, but I’ll be there in spirit! See Deb’s donation page here, if you’d like to support the cause.