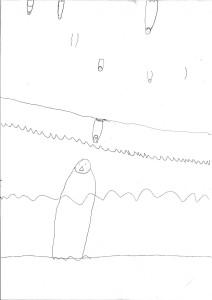 I have just fed, watered and entertained an eight year old non-relation. First, I picked him up from school. I was really early because I hadn’t done this before, and noticed a couple of dads sitting on the tiny benches, staring into space. Clearly a nice interlude between one thing and another. I watched some kids skipping using a long rope, under instruction from a couple of teachers. It appeared to be a skipping lesson. Hmm. I seem to remember skipping, like patty-cake hand games (is there a proper name for this activity?) being shared spontaneously between children, no lessons required. Anyway, it was advanced skipping, so maybe there was an argument for it. They had a very long rope, and three kids at a time were invited to jump. Some got into rhythm with each other easily; others were over-thinking it and getting the rope tangled around their legs. I brought Markus back to my house where he expressed an interest in kites and penguins. As in, making a kite, making a baby penguin, putting the penguin on the kite and making them all fly, all before his mum turned up to take him to his music lesson. Right. I had some old dry stalks from last year’s vege garden that were reasonably straight. These became the struts for the kite. Newspaper. Sticky tape. A tail. String. It sort of flew. Marcus ran up and down on the cement slab that will soon be the floor of the new shed. Kite, check. Back inside for Part Two. I’d done the kite from memory, without having to Google it, but the baby penguin seemed to call for some reference material. We watched YouTube clips of baby emperor penguins – too cute! – and stumbled on a clip showing how to make an origami baby penguin. This was incredibly complicated and lost us after about four folds. Time was running out! In the end we settled for some hand-drawn penguins that went off out the door with the kite, to possibly be attached later.  He left leave behind a penguin/Antarctica drawing which can be viewed in two directions.

On Sunday we’ll be joining the March Australia gathering in Machattie Park, Bathurst at 10.30am. I’ll be there for a lot of reasons, but probably the two most important are 1) saving the Renewable Energy Target and 2) saving Medicare.

4 thoughts on “A penguin kite on the slab”