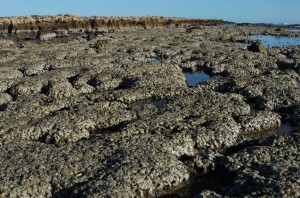 Oysters at the blowholes near Carnarvon, Western Australia.

At the Blowholes, a popular fishing and camping spot north of Carnarvon in WA, there’s a sign that says: “Yes, you may eat the oysters.” I’m assuming it’s still there – it was in 2005 when I took Steve to see one of my favourite places on the planet. At first it looked like one of those signs that give you a great big list of things you can’t do. But this one just said go for it, and gave hints and tips. Prise the shell open with a bread knife. Swish the oyster round in the sea to rinse it. Chew and swallow it, savouring the blast of pure ocean feeling. Or something along those lines.

Today I’m thinking about oysters and impermanence. Last week, it was a year since Dad “went”. I like that euphemism. He went somewhere, not sure where, but the fact is that he is gone and isn’t coming back. Not the way we knew him. I think of his arm muscles. He used to pump them up to show them off. The blood coursing through those veins. The tattoo on his bicep with the pink love-heart and the word “Yvonne” in a scroll across it. Just before he went, I looked at that tattoo, so familiar all my life, and noticed that it was hanging on loose skin and you could no longer really tell what it was. That was once the strong arm that changed tyres, drove trucks, prised oysters out of their shells from the rocks.

Nothing (nothing that we definitely know about) is permanent. Everything is coming and going, coming and going, coming back in different form, from a living body to ash to a living body again. There is no permanence, but there can be repetition.* You can’t go back to how it was, but you can do things again. It won’t be like the last time but it’ll remind you of the last time. You can eat oysters again. That’s what we did last Wednesday when, in honour of Dad, we bought a towering stack of seafood at the Shelly Beach golf club, with a view out over the sea, this time the Pacific. Most of the seafood, I’m sorry to say, was pretty ordinary. There is nothing like growing up on the coast of WA to spoil you forever for fresh prawns and lobsters (we called them crayfish or crays). But the fresh oysters, served in their shells, were plump and the taste was not nostalgic but thrillingly right-now. The oysters of now!

Just after my surgery in May, my friend Jacquie brought in a book of quotes by Jack Kerouac called You’re a Genius All The Time. After she’d left, I sat in bed and read:

No fear or shame in the dignity of your experience, language & knowledge

We’re all coming and going, all the time. Death is the primary fact of life; it’s there in life’s first breath. And yet there’s this fear and shame. Being diagnosed with Stage 3 cancer has sometimes felt shameful, even though I tell myself there’s no shame in it. I’m somehow failing, not doing life right, by growing tumours in my abdomen. And yet this is ridiculous. Everybody dies; everyone who has ever lived has died or will die. There is no shame in growing tumours or having tuberculosis or a stroke or a heart attack. These are simply different forms taken by the great, inevitable, unavoidable fact of life.

Reading that sentence from Kerouac, I sat in bed sobbing, but in a good way. The young nurse got interested. “Who is Jack Kerouac? I’ve never heard of him.”

“He wrote a book called On the Road.” I think she thought Kerouac was some sort of self-help author.

I read out the sentence, sobbing through it again.

Today, I feel good and most excellently alive. All my numbers and scans are excellent. My tumours have been taken out. The doctors are impressed with my progress. I have only one more chemo session before the end of all this treatment and surgery. After that, I can look forward to feeling well in Spring. And then I can look forward to a nice long remission. Let’s say twenty years – why not? Every now and then, during that time, I’ll eat oysters.

* Repetition is the only form of permanence that Nature can achieve.

12 thoughts on “Yes, you may eat the oysters”