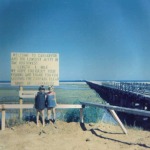 9 thoughts on “Time to fly the flag, Carnarvon”