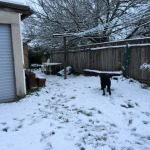 Last Friday was strange. We were up at about one or two in the morning, standing in the pool of light just outside the back door, looking at the white dots gently, steadily, coming down out of a black sky. The black dog was being speckled with white stuff. We had white stuff on our shoulders. Snow. Snow, for most Australians, is an unusual thing. It’s something to get excited about. It’s transient. And then it was daylight. I’d hardly slept because I don’t sleep well these days and being awake for the snow had made it worse, so I was snuggled far down under the doona, but Steve was making me get up to have a look. Out of the bedroom window, everything was white. In the back yard, the little tree we’d planted over my dead cat ten years ago was half its height, branches touching the ground, weighed down by snow. Steve made snowballs in his bare hands and threw them at Bertie, who caught them in his teeth. Unlike a tennis ball, they had no resistance. His teeth snapped down over them as though they were made of nothing. He wagged his tail furiously.

Snowmen appeared all over town.

When Steve got home after work, he asked if I’d heard the news. This seemed odd – I’d been living the news of the day along with everyone else. It was Snow Day. What more news could there be? So you haven’t heard about Elie’s Cafe? No. What about it?

Elie’s Cafe is one of the town’s most popular cafes. It’s diagonally opposite the Council chambers, not far from the Western Advocate, in the main street, near the war memorial. It’s housed in the old Royal Hotel where town leaders once addressed the citizens from the balcony. That Cafe. Well, Elie Issa, the owner, was found dead in his living room today. Everyone knows Elie. He’s the jovial man in the corner opposite the counter, laughing with friends who join him at the table, poring over the day’s papers. To go into Elie’s Cafe is to also see and hear Elie, a permanent fixture. Oh. He is dead. Not only that, but his girlfriend is dead, too, and they were found in the living room with a gun nearby, and there are no other suspects, and they’re saying it was a murder-suicide.

And you go into cognitive dissonance. You hold the two ideas in your brain – this jovial, laughing man greeting his customers and friends, and the bloody aftermath of violence – and they don’t match up. This is what it is to be shocked: the world is not quite what you thought it was.

And then, in the hours and days afterwards, a narrative framework  begin to emerge that might hold these ideas together. The next day, in the Sydney Morning Herald, there’s a story based on interviews with friends and family of Nadia Cameron, the beautiful woman found dead with Elie in the living room of the ordinary house on Rosemont Avenue, Kelso. They say she’d broken up with him, and he was trying to win her back. They say he’d been jealous and controlling and she wanted nothing more to do with him, but she felt sorry for him. And now the story begins to settle around a national conversation about domestic violence and women dying at the hands of men who would control them. A new Elie Issa emerges, a Jekyll and Hyde: jolly at work, murderously jealous at home. Laughter as snow job; as a thin veneer over the darkness.

There’s a story, and then a shock. But we can’t stay in shock, in the fact of our not-knowing. As quickly as possible, we want to build a new story so that we are not left hanging in that strange space between ideas that seem to have no connection.

The next day, the sun was shining. Snow Day had vanished. There were just tell-tale patches of white in the shade, and odd white piles that had been snowmen. And the day after that, just damp ground.

7 thoughts on “The snow job and the murder-suicide”