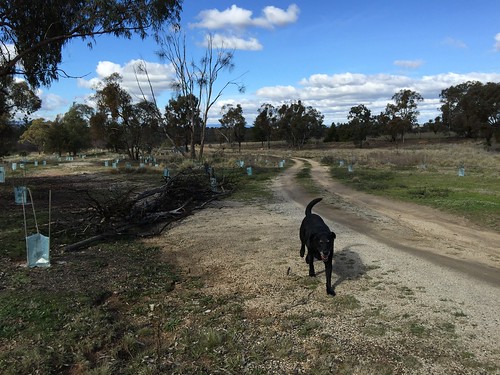 I remember Mum saying that pierced ears were common – this is a very long time ago, and I don’t think she still holds this view. This retro opinion came back to me as I wrote the title for this piece, because I quite like the word common. It’s friendly, democratic, all-in, non-snooty. And it can even be a bit trashy. The Blayney Road Common, just out of Bathurst on the road to Blayney, is all of the above. The Blayney Road Common is a bit of land on the side of the road, with trees in it, and a lot of weeds, a lot of rubbish. It’s a place where people might throw an old mattress or sit under a tree and smoke a bong (I have evidence of this – see below). Nearby, there’s public toilets that are always locked these days but are well known as a gay “beat”.

There’s a greyhound practice track there; it has obviously been there a long time. Generations of rusting old numbered dog boxes are there, as well as the current, new, aluminium spring-loaded new one. Before I got sick, I used to race Bertie to the end. He’d always win if he didn’t get distracted by a smell or a suspicious movement in the grass.

As you get out of the car, a mob of kangaroos silently hops away. The big buck kangaroo – macho chest of rippling muscles – might wait, standing there to watch your movements, letting you get quite close before turning on his thin angles and bounding away after his mates. The earth is a mass of round rabbit droppings just a little smaller in diameter than the marbles you used to play with at school. There are rabbit scratchings everywhere – shallow holes.

Lately, the Blayney Road Common has been undergoing a health and beauty regime. Weeds are being cleared, native plants planted, rubbish collected. Areas that were so thick with blackberry and other weeds that you couldn’t see through them or walk through them have been cleared, bringing the long-hidden detritus of generations to light. Some of it is just recent rubbishy rubbish; other items are so old that they’ve becoming interesting, collectable. I picked up an old glass bottle stamped with the following:

The “ALWAYS” seems brave, now. How long was always, for Scott’s detergent company? A couple of decades? A hundred years? Last time I saw this bottle I left it there, under the theory that this was the commons, and the commons are for everyone, and this includes old bottles in old middens. When I went back today, to a little spot near the black cockies’ roosting tree, it was still there. I took it. I decided it was “rubbish”, and rubbish should be tidied up, shouldn’t it?

I’m not so sure rubbish should be tidied up, or privatised. I don’t mind eyesores. So-called eyesores – abandoned houses, old industrial sites – get the imagination going. Look at this improvised bong, made from a plastic drink bottle and a bit of garden hose, found under a tree. 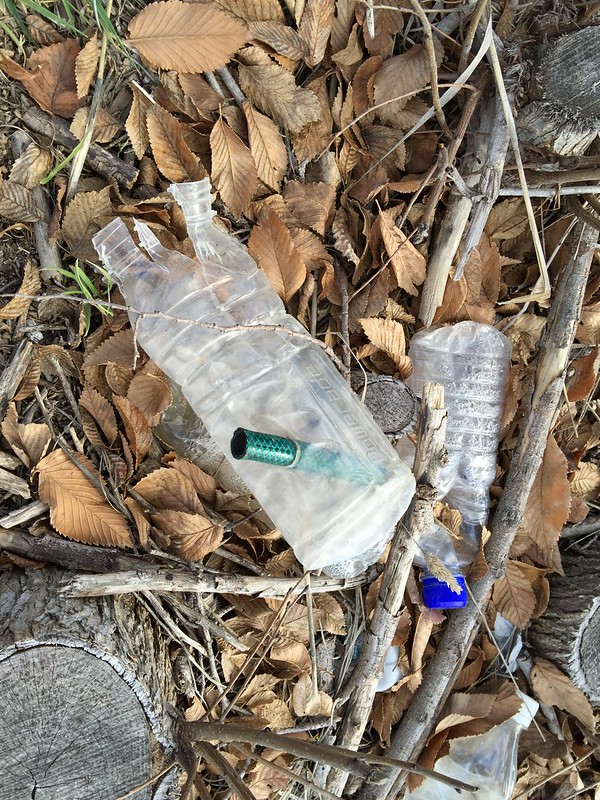 I took some photos of the big old dead eucalyptus tree where every dusk, black cockies come in for landing. They come in dribs and drabs, squealing and squeaking like rusty doors. 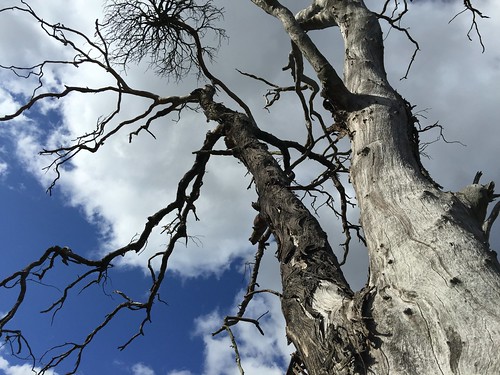 Probably because I have a big pile of marking to do, I didn’t want to leave the Blayney Road Common today. I wanted to stay, and to botanise.

In her book White Beech, Germaine Greer remarks that when women of a certain age fall for botanising, they fall hard. I am in danger of this. I look at all the plants and feel the vast depths of my ignorance. What is this? What is its name? I feel the urge to catalogue, taxonomise, process all these living things. 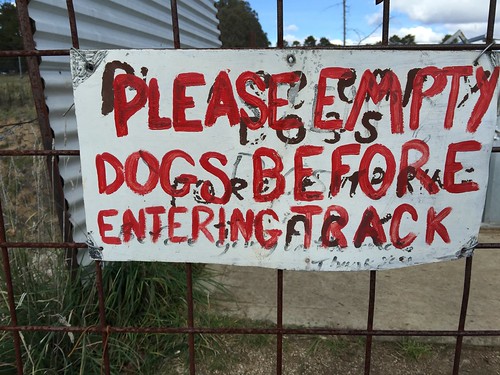 Bertie and I arrived at the deep dip behind the Starting point of the practice greyhound track (with its hand-painted sign, Please Empty Dogs Before Entering Track) and looked down into the filthy bit of water below. You couldn’t even see this before; now it has been cleared. We heard the frogs talking. And then Bertie decided that a bit of water, no matter how lousy, was always worth a try. He slithered down the bank and sat in it, amongst the bits of abandoned things. The frogs went silent. Bertie churned up the greenish water, made it go brown. He closed his jaws over a large stick, scrambled up the bank. The frogs started up again.

1 thought on “The black cockies of the Blayney Road Common”