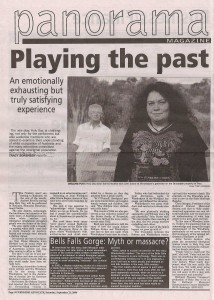 Andrew Bovell’s play, Holy Day, connects with incidents in the colonial history of Bathurst. Published in The Western Advocate 23/9/06.

THE “history wars” are coming to Bathurst. At the end of the month, Andrew Bovell’s searing play, Holy Day, will be performed at the Bathurst Memorial Entertainment Centre. The play depicts, unsparingly, the harshness and miseries of the early years of Australian history, when white settlers and Aboriginal inhabitants struggled grimly over the future of the land.

The play starts with a tragedy – a missing white child – and ends in more tragedy, as mystery, hatred and revenge swirl towards a chilling climax. It’s exactly the sort of outpouring that Prime Minister John Howard had in mind when he rejected the “black armband” view of Australian history not long after coming to office in 1996.

The play is not set in any particular place and does not refer to particular historic events. But the play could easily have been set right here.

Escalating skirmishes between white settlers and the Wiradjuri, led by the young warrior Windradyne, led to the declaration of martial law by Governor Brisbane in August 1824. By October, the Sydney Gazette had reported that Bathurst “with its surrounding vicinity is engaged in an exterminating war.”

According to local Wiradjuri elder Gloria Rogers, stories of that time have never been forgotten by her people.

She said it was essential to “acknowledge what happened before we can go forward. It’s too bad if people are uncomfortable about it. Sometimes it’s painful for us, too.”

She said there were many “sorry places” around Bathurst. She said a spot on the Kelso side of the Macquarie River is the place where Windradyne’s wife, mother in law and child were killed by a farmer as they dug potatoes from a potato patch.

“At O’Connell, Aboriginal people were hunted down and caught, mainly women and children,” she said. “The children were clubbed with rifle butts.”

The events of 1824 are also preserved in the collective memory of the Suttor family of Brucedale, who have farmed the area continuously since 1822. Each new generation is told the story of how the young farmer William Suttor and Windradyne met face to face one night when Windradyne’s men came to attack.

Suttor, who had befriended the local Aborigines, spoke to Windradyne in the Wiradjuri language, and defused the situation. Windradyne’s war party withdrew, and carried out attacks elsewhere.

“He was physically striking apparently and William was a big guy physically,” John Suttor said. “You can imagine them meeting at the door, the two young warriors eyeballing each other.

“This story is part of the family legend, we grew up with it.”

The friendship between the Suttors and Windradyne continued until the warrior’s death. His gravesite on the Brucedale property is now on the State Heritage Register.

Chris Morgan, President of the Bathurst District Historical Society, said that to “fully understand and appreciate our own cultural traditions now we must have an understanding of what happened in the past, good and bad.

“In the case of Wiradjuri history, I believe it’s important that we acknowledge and accept the tragic displacement of the Wiradjuris, particularly as we move towards the bicentenary of the colonial settlement of Bathurst in 2015.”

“People tend to sugar-coat the past,” she said. “Come and see the play. It’s something that can possibly make you want to check back your history. What really happened, what life was really like back then. You walk away going [makes a gesture of horror], but you will enjoy it. It’s a play with real emotions and intensity.”

The Bathurst Theatre Company’s production of Holy Day is on at the Bathurst Memorial Entertainment Centre September 28-30. Bookings: 6333 6161.

In interviews for this story, both Wiradjuri elder Gloria Rogers and John Suttor, direct descendant of one of the earliest white settlers of Bathurst, referred to an incident in which Aboriginal people, including women and children, jumped to their deaths to avoid advancing “redcoats” (the colonial militia).

In 2001, a display exploring stories of a massacre at Bells Forge Gorge north of Wattle Flat appeared in an exhibition in the National Museum of Australia in Canberra. This prompted a sharp attack from author Keith Windshuttle, who called the stories a “complete fabrication.” Windshuttle has been at the centre of the “history wars”, arguing that number of Aboriginal deaths through massacre has been exaggerated.

When asked to explain his position for this story, Windshuttle replied: “The story of the Bells Falls Gorge Massacre is pure mythology. There was no contemporary evidence for it. It was originally a story told only by white people and emerged as oral folk tradition in the early twentieth century. The first reports did not appear in print until 1962, that is, more than 120 years after the incident supposedly occurred, when an article by a
Bathurst amateur historian [Percy Gresser] reported it as one of the oral legends of the district. Aboriginal activists only heard of it after that. Since then, this folk myth has been retold as ancient Aboriginal tradition.”