Is nature a giant cat? Nikola Tesla wondered about this, as he stroked his cat. He’d seen lightning tear through the sky during a storm. Now his cat, Macak, was sparking and crackling in static electricity. “Is nature a giant cat?” he asked himself. “And if so, who is stroking its back?”

The young Tesla, living in a village in what is now Croatia, was highly tuned to the energy flowing all around him. As he grew up, he devoted himself to finding ways to harness this energy. Later, living and working in the United States, his insights and inventions helped lay the groundwork for the development of electric power in the early twentieth century.

I was thinking about Tesla and his cat as I went off to the Annual General Meeting of Bathurst Community Climate Action Network last Wednesday. The guest speaker was Craig Memery, and he was going to talk about getting renewable energy out of the “alternative” sphere and into the mainstream. Tesla, a hundred years ago, was already thinking about how fossil fuels were finite, while energy taken directly from the sun would allow humanity to flourish without having to pillage the earth it lived on. 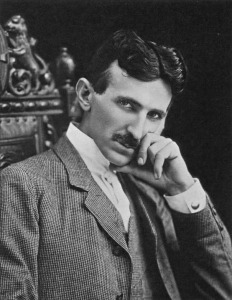 In The Wonder World to be Created by Electricity, written in 1915, he argued:

If we use fuel to get our power, we are living on our capital and exhausting it rapidly. This method is barbarous and wantonly wasteful, and will have to be stopped in the interest of coming generations.

In The Problem of Increasing Human Energy (1900), he wrote:

A far better way … to obtain power would be to avail ourselves of the sun’s rays, which beat the earth incessantly and supply energy at a maximum rate of over four million horsepower per square mile … an inexhaustible source of power would be opened up by the discovery of some efficient method of utilizing the energy of the rays.

As it turned out, the twentieth century took us down the “barbarous and wantonly wasteful” route; it’s only now, a hundred years later, that we’re finally getting what was obvious to the young Tesla.

But not all of us are getting it. As I prepared to head off to the meeting, the environment minister, Greg Hunt, announced he finally had the numbers in the senate to bring the government’s “direct action” policy into being. This policy is the replacement for the previous government’s carbon tax, which has now been abolished. Under “direct action”, major carbon emitters bid for a chunk of $2.55 billion (over four years) for projects that will reduce their emissions. The fossil fuel industry loves it: instead of being taxed, they get money! The government argues that this will satisfactorily reduce emissions, because the big polluters will be eager to get some cash for doing the right thing. But major emitters won’t have to participate in direct action – it’s up to them. It’s quite possible the worst emitters will opt not to take the money and continue with business as usual. And those who do elect to be part of this scheme won’t have to tell us how much money they got and what they’re doing with it: agreements between the government and polluters will be secret (otherwise known as “commercial in confidence”). Nobody really expects this scheme to work, even its proponents. It’s just a way of having a policy when you don’t really want to have a policy.

Considering that climate change is happening even faster than predicted and that we Australians are the worst per-capita emitters in the world, this is a poor show indeed.

The BCCAN AGM was held at the Flannery Centre in Havannah Street, a beautifully designed eco-friendly building. As we listened to Craig Memery’s presentation and tried to read his densely packed PowerPoint slides, the windows busily began to whirr, all by themselves. They were opening up to let some cool air in. I began to calm down. The government may be off its rocker, but counterforces are gathering momentum.

Craig Memery is an energy consumer advocate with the Alternative Technology Association (ATA). He spends all day, every day, studying the energy market and discussing it with consumers, governments, generators and retailers.

His assessment is that despite the current government’s policies, the fossil fuel industry is already on its way out – for economic reasons. Australia currently has “a massive over-investment in generation capacity” with three gigawatts of generation capacity mothballed over the past few years. He said the average price for energy is “not high enough or volatile enough” to be profitable. “I expect there won’t be any more new coal-fired power stations in Australia,” he said.

The problem for the coal-fired power stations is that demand is dwindling. With an expanding population you’d think the demand for electricity would be growing, but it’s not. There are various reasons for this; one of these is that people have been voting with their feet and going solar. They’re not necessarily using less energy; it’s just that they are no longer getting it all from coal. Through an accounting quirk, our agencies don’t actually record power from solar panels as an input into the system – they just write it off as less demand. So for example, right here in Torch Street, South Bathurst, we have 12 panels on our shed. These panels are covering 70-80 per cent of our total electricity use. We are a little power station! But our contribution is not counted as such. Instead, it is just written off as a reduction in demand from this household.

So all these coal-fired power stations, originally expected to bring their owners mega profits into the distant future, are starting to look like white elephants. Which is why they’re in overdrive to get the ear of government. And they’re winning on that score.

Only they’re not really winning,  not in the long term. According to Craig Memery, they’re actually facing a “death spiral”.

The death spiral scenario goes like this: First, massive investment in assets like power stations, poles and wires. Followed by people going solar. Then declining demand, causing the power companies to try to recoup more of their investment dollars though power bills. Followed by more and more people going “off the grid”, leaving a smaller and smaller pool of remaining customers to share the load of paying for all that expensive investment. In the end, all you have left as your customer base is a hapless bunch who can’t afford to get off the grid.

Clearly, the best solution is to put coal out of its misery as soon as possible, and build an energy future based on renewables. Instead, the government is withdrawing support for renewable energy and we’re being asked to fund – and fund again – the long, slow death spiral of fossil fuels.

Still, despite the madness at the top, communities are taking matters into their own hands. According to Craig Memery, there are about 100 community renewable energy groups across Australia working on local solar and wind energy projects.

They’re being dogged by the federal government’s policies, but they’re not going away. For Craig Memory, it’s about moving from twentieth century power to twenty-first century power; from big centralised power stations providing a one-way energy stream over vast distances, to a decentralised model with energy going in and coming out from many different nodes.

Despite his early fame and long list of useful inventions, Tesla died penniless and alone; his only friend was a pigeon. But Tesla’s ideas about harnessing the energy of the sun without resorting to the burning of fossil fuels are living on.