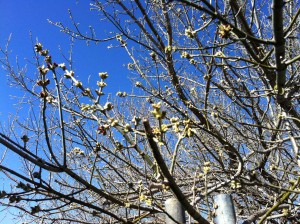 Hints of spring on the tree hanging over my back fence.

For most of this year I’ve been working towards my own personal R rating: Remission. Once I’d been diagnosed and had a treatment plan, I was able to see that by spring, I’d be clear of surgery and chemotherapy, my hair would be regrowing like the buds on the local blossom trees and, if everything went well, I’d be in remission. That became my goal, remission in spring. As it turned out, I got there with 12 days to spare!

On Thursday morning, the doctor casually mentioned the R word in a little volley of sentences produced by a brief examination of my medical file (now a big fat pile of paper like you get in complicated legal cases) and a mouse-scroll through my CT scan. Wait, I thought, did he just say REMISSION? I stopped him and got him to say it again. This wasn’t my usual chemo doctor; this was a stand-in I hadn’t met before. He had absolutely no sense of occasion. Yes, he agreed, you’re in remission. It was a beautiful moment.

Afterwards, Steve and I found ourselves in the giant complicated maze that is the Parramatta Westfield shopping centre. We shared a plate of nachos from a Mexican-themed eatery. While things had been looking good for me since surgery, it was only upon hearing the R word that I was really able to let out the breath I’d been holding since February. I ate my lunch as a person who had had cancer. Past tense.

I know I’ll never be out of the woods. My fate now is to wander in these woods, wondering when (a lot of Ws in this sentence) or whether I’ll get another wallop. But for now, past tense rules.

I’ve had a lot of trouble writing this blog post. It’s now Saturday and I’ve been meaning to do it since Thursday afternoon. In the middle of treatment I blogged every Thursday without fail, no matter what, even when hooked up to my post-operative patient-controlled pain relief (aka Green Button), even when I had to write from a prone position with one finger picking out letters on the iPad. Suddenly, with this great release of pressure, it’s been hard to get motivated. Anyway, here we are now.

Meanwhile, bit by bit, I’ve been getting back out into the bustling world. Last Saturday a car load of us went to Kandos, about an hour and a half away, for a craft forum organised by the Cementa people. It went wonderfully well (more Ws). I showed my crocheted guts, and then threw them out into the audience. As someone caught one of my fuzzy tumours I suddenly realised the unfortunate symbolism – a bit like the bride’s bouquet – but it was too late to worry about that. (Alex Wisser of Cementa has done a great write-up of the evening here.) Afterwards, as we sat round the fire eating hot Kandos chips, Alex was holding forth about something or other, with expressive hand movements. His young daughter wriggled in behind him on the sofa and began doing his hand movements for him. It worked a bit like the YouTube clip of the dogs eating dinner. I found this so funny I almost lost the plot entirely. It was my first true belly laugh all year. It was my first big stomach-muscle workout since surgery.

On Wednesday, after I’d gone into the white doughnut for my CT scan, I got on the train to Circular Quay to check out the Anne Messager exhibition at the Museum of Contemporary Art. One of the artists at Kandos, Nicole Barakat, had told me about the room full of bodily organs hanging from the ceiling. And there they were – a multitude of body parts, larger than life, made out of fabric and soft filling. Everyone wanted to walk right through and amongst them (and feel them), but the minder was stopping us and telling us to walk around the edges and don’t touch. I felt a great companionship with these soft pieces. In another room, a darker vision: everything in black, objects spread out across the floor, some “breathing” eerily, light playing over them to throw spooky scenes on the walls, and a big projected clock displaying “real time”. The real time was about 3pm. It was an image of death, dying and end-times. I felt an affinity with this, too. This was the day before my doctor’s appointment to get my test results.

On Friday, we took Larissa’s dog Harry to have acupuncture. He sat quietly with small needles jutting out of his fur. There was a small brown curly dog there that was partly paralysed as the result of a fractured spine. It was being dried off in a big fluffy bath towel. It was all strangely relaxing.