It’s Friday afternoon already. Where have I been? It’s hard to say.

In an effort to answer this question, I’m going to give a list of twenty things – animal, vegetable, possibly mineral – that might help me to recall some of the hours of my own life. 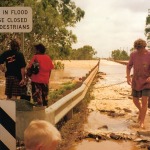 1. I’ve been watching the Gascoyne River come down, in real time. Excitement had been building for days, as big rains in northern Western Australia began making the rivers flow. The brown water spread out across thousands of kilometres of red-brown land, eventually sending feelers into the dry gravely riverbed near Carnarvon. As the lead waters began to flow, people went out to have a look, as they’ve always done and as we used to do. Children splashing excitedly in water. Eels flipping in the shallow lead waters. I followed all this on Facebook. Locals have been posting updates and photographs on the “I Grew Up in Carnarvon” page so all of us, Carnarvonites and ex-Carnarvonites alike, could follow along. It’s nothing like being there – the smell of the air, the heat, the crunch of gravel, the sounds of the bush and the birds – but it’s a way of remembering, of sharing the excitement.

That’s one thing. I don’t think I’m going to get to twenty. But let’s at least get to two.

2. I have been feeding Sebastianne, a friend’s tortoiseshell cat. She is mottled all over. Her nose is mottled. She yowls when I arrive, hisses when I try to leave, doesn’t seem to eat much. Her mistress has left out five – yes five – litter trays for her to choose from. This is because Sebastianne doesn’t like to revisit a used litter tray. This morning she was rolling on her back, rubbing herself against the warm terracotta brick paving just outside the back door. Beside her were giant zucchini leaves and yellow flowers.

3. I have been drinking many cups of tea.

4. I’ve been teaching at CSU. First week of session. First days back after a year off sick. One class on Wednesday, one on Thursday. As we went round the room introducing ourselves, I asked Wednesday’s class to say their names, their area of specialty, and one other word – could be any word. These (below) are the words given by the students, in the order in which they were said:

12. Ottoman. (I asked whether he meant footstool or empire – he meant empire.)

18. I find this list interesting. Some words seem to be inspired by the words that came before (eg potato/couch and platypus/turtle/beach), while others seem to spring out of nowhere, like Ottoman and Hypotenuse. Most are nouns. Most of them trigger clear mental images. I didn’t ask Thursday’s class to give me a word. I regret that.

19. After my Thursday class I went for my first meeting with my PhD supervisors. Yes, for better or for worse, I’m embarking on a PhD. My PhD is going to relate in some way to crocheting my abdominal organs through ovarian cancer and treatment and how this relates to Life, the Universe and Everything. We had an invigorating discussion. I felt hopelessly ignorant. My brain has been teeming, screaming and running in circles ever since.

20. Last Sunday I sat with a small group of women at Vi’s house in Lambert Street and crocheted a flower-thing (actually it was part flower, part tiny body organs) to add to Prudence Mapstone’s giant crocheted blanket to  commemorate the 1960s flower power movement.

That’s twenty things! I cheated, but I’m going to let myself off the hook.