I’ve been channeling my mother. Let me hasten to add that she has not gone over to the other side. She’s alive and well and doing some renovations. I’m channeling an earlier incarnation of my mother, the one in her 20s and 30s, the one that used to lay out yards of fabric and, with a pair of giant, sharp, impressive scissors, would cut and cut and cut.

“I want to go cut cut cut like thaaaat!” I apparently whined at a young age. I wanted to get my hand on the scissors. I watched as well-dressed, sometimes perfumed, ladies came to the house and Mum got down on her supple knees to do their hems. And then there’d be the staccato runs of her green Singer sewing machine. 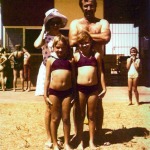 She made her own clothes and the clothes worn by my sister Deb and I. Even our knickers and bathers. In this pic Mum’s wearing a crisp white dress with blue flowers that she wore for years and we’re wearing the red bikini bathers she made. (Everyone said these were cute, but we yearned for shop-bought ones.)

By the late ’70s she’d switched from ladies’ frocks to curtain contracts to earn a living. Nice straight lines. A lot easier, and more lucrative, than shaping fabric to women’s bodies. 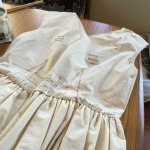 Now I’ve got my own hands on the scissors. I’ve made a calico toile for a set of three turquoise fifties dresses with big gathered skirts. We’ll be coming on stage in our lovely frocks, only to disrobe to our taupe “undies”, in which we will do some physical jerks while someone else reads out our True Confessions. As I whined last week, this is outrageous behavior for me, especially the physical jerks. But I think I may be on top of skipping backwards. As long as I don’t think about it too much.

But making the dresses … that’s beautifully familiar. The movements of scissors, fabric, machine, pulling gathers – they’re all body memories. Apparently when you watch something, the same parts of the brain are triggered as if you do the actions yourself. As I sew, I channel my mother’s movements. 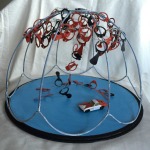 Meanwhile, this year’s Waste 2 Art project is ready to ship. It just needs to go down the road to the Flannery Centre today at 2pm, and then it just does its own thing. I’ve finished fiddling with it. It’s in its cardboard box, waiting to go out of the door. I really enjoyed painting the ring-pulls red and black. The finished piece is a bit of mess, really, but it’s nice to simply participate. The exhibition will be open from May 1-10.

Meanwhile, the world goes on being convulsed by trauma; now Nepal. And before that the Kenyan university students. But Bathurst is absolutely gorgeous at this time of year. The trees are yellow and red and orange; there are leaves everywhere. The air is crisp.

When you pull back on a ring pull on a can of beer or soft drink, you can hear and see and feel – in the tiny droplets of water – the action of carbon dioxide. It’s the CO2 that makes the fizz.

When I walk my black Labrador, Bertie, around McPhillamy Park on the top of Mount Panorama I keep an eye out for ring pulls. I only collect the old-style ones that were discontinued in the 1980s. I like the way their twisted, folded shapes recall the hands that originally tore them from the cans. Delightful moments of fizziness and pleasure are frozen in time in these found ring pulls.

In this piece I have used ring pulls to represent carbon dioxide. It is often represented in three-dimensionally as two red spheres (oxygen) attached to one black sphere (carbon). I painted the ring pulls with Hobbytex paint recovered out of old tubes. (Hobbytex was a fabric-painting craze in the 1970s.) Anyone who has used Hobbytex would have noticed its powerful petrochemical fumes.

Carbon dioxide provides more than fizz; it’s an essential part of all life on this planet, and it helps to create the greenhouse effect – a global blanket – that keeps the earth warm enough for the human life we’ve grown accustomed to over the entire course of human development.

You can have too much of a good thing. Since the industrial revolution, when we began burning fossil fuels in earnest, the amount of carbon dioxide in the earth’s atmosphere has grown by about 30%. Now, our global blanket is getting a little too warm. I’ve represented this by using the curve of the lamp frame to suggest the curve of the atmospheric blanket over the surface of the earth.

I found the metal toy car, encrusted with dirt, in the back yard. It has been painted in the black and white Marlboro livery of motor racing legend Peter Brock’s cars. Carbon dioxide molecules trail out the back of it like a bride’s long train, and ascend into the overarching atmosphere.

Every year at about this time, I think of Simpson and his donkey. I’ve known the story of this courageous pair – how they toiled up and down the cliffs at Gallipoli, taking wounded soldiers to the hospital ships – for as long as I can remember. It’s a fragment of a bigger story that encompasses poppies and mud and the opening scenes of George Johnston’s My Brother Jack, where there were gas masks and crutches in the hall and strangely disfigured men lurking out the back.

The earliest Anzac Day ceremonies were personal; they evoked particular young men that people had known and loved. Now, a century later, those young people are more abstract to us. But because of the stories woven round them, they will not be forgotten.

What about the young people a hundred years from now? They don’t yet have names or faces. But they’ll be just as real as we are now. And it may be that they will look back at us and wonder how we could have forgotten them. How could we have had so much information about climate change and yet done so little?

Perhaps, unlike the Anzacs, they just don’t have a good enough story. Social scientists tell us that information, by itself, doesn’t make much impact on people. Stories, on the other hand, have sticking power. And the stories we don’t tell each other – the silences – are just as important.

Anzac stories can be told simply, powerfully, emotionally. There’s a boy from the bush, running into enemy fire, legs like springs. Climate change offers some scientists writing papers full of maths equations that nobody else can read and a vague sense of guilt about not switching off the power at the wall. For most people, climate change just thuds quietly to the bottom of the brain.

But stories are made as much as they’re born. Historian Charles Bean worked tirelessly to promote the memory of the Anzacs at Gallipoli. The Gallipoli story caught on because it combined with the needs of a new nation hungry for stories to tell about itself. A century on, our political leaders are keener than ever to bathe in reflected glory.

It certainly beats talking about parts per million of carbon dioxide molecules in the atmosphere. We can know, and yet we can forget.

First published in the Western Advocate, April 25, 2015 as a contribution to the Sustainable Bathurst column.