Colostomy chic. Who would have thought it was a thing? Well, it is. I have to admit that before I woke up out of an anaesthetic fog with my own, I’d associated the colostomy bag with the old and doddery. Since then, it’s been a sharp learning curve. There’s a world of Crohn’s disease, ulcerative colitis and all sorts of cancers out there, hitting people of all ages and stages. Some of these are fashionable young women, and they’ve taken to the Internet with their thoughts and hints and tips. Mostly it’s all about how to dress to obscure the outlines of the bag: lots of ruching, ruffles and artful drapery.

There’s also a world of options if you’d like to choose decorative bag covers or a sexy look.

But some have taken colostomy chic a step further, choosing the “out and proud” route to overcoming shame and stigma. Last week, one of the comments on this blog drew my attention to Bethany Townsend, a 23 year old model who posted a photo of herself in a bikini on Facebook.  The pic went viral – in a good way. Then there are people like rock-climbing blogger Heidi Skiba who has an ileostomy (where all of the large intestine is removed, not just part of it as in a colostomy). Photos on her blog show off an outdoorsy life in full swing, as well as the occasional pic with her bag in plain view.

It isn’t that long ago that the colostomy bag was one of life’s great unmentionables. But that’s changing rapidly.

Lee, my stoma nurse at Westmead, gave me a rundown on the history of the bag along with practical instructions about how to use the ones she was waving under my nose. She said it was only in the 1950s that colostomy bags became widespread. One of her favourite patients was an older man who’d had surgery as a teenager. There were no colostomy bags available at the time, so his stoma (outlet) was simply wrapped up in dressings, which his mother changed for him. When a rubber colostomy bag became available, his life changed. He became a bank manager and lived “happily ever after” (he recently died of an unrelated problem). Still, it would not have been easy back in the 1950s and ’60s. The community nurse who visited me last week (whose daughter’s boyfriend is working for Angelina Jolie, entertaining her kids – how’s that for three degrees of separation?) said that those old rubber colostomy bags were a bit stinky. Unlike today’s light, waterproof versions with their own little charcoal filters, the old versions didn’t stick to the skin; they were held on by a belt, and the situation was always in danger of becoming iffy. One solution was the use of a black tar-like substance that people used to slather over their stomachs to get a seal. This was messy.

So I’m glad that having had the misfortune of losing a length of my large intestine, I have at least had the good fortune of arriving at a time when colostomy bags are well designed, when the Internet is a portal to “ostomates” around the world and there is such a thing as colostomy chic. 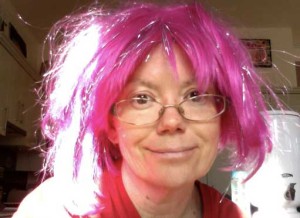 Totally bald under this pink wig.

Meanwhile, I continue to feel fabulous. I keep forgetting that I’ve got one last chemo session next week; that I’m not out of the sick-bay yet.

And – just a quick and inadequate thank you to family and friends who just keep on coming with care packages, flowers, cards, soup and – the latest – fun hats and skeins of teal and purple wool!