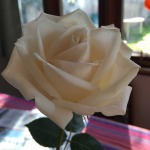 It was another gorgeous spring day in Bathurst, with birds vying for trees and plum blossoms dusting the footpaths with pink petals. The priest in white and gold stood on the steps as we made our way into the cathedral with its giant sandstone columns, soaring stained glass windows and an altar surrounded by dozens of flickering candles. There were easels holding up two portrait shots of a beautiful brown-haired woman. One was a close up with her chin resting on her hands. The other showed her with a young boy. Moving quietly among us were Zenio Lapka and Chris Seabrook, photographers for the Bathurst City Life and the Western Advocate. Their presence was a reminder that this was not an ordinary memorial service. People were here, and people would want to know about this ceremony, because Nadia Cameron is one of the 62.

So far this year, that we know of, 62 women have died at the hands of their partners or ex-partners. Back in July, the number was not quite that high, but it was climbing. It was on July 18, the day Bathurst was blanketed in snow, that word went around town that something dreadful had happened: Elie Issa, proprietor of the ever-popular Elie’s Cafe, right in the middle of town, had murdered his ex-partner Nadia, who worked at Bathurst Real Estate a couple of doors down. He’d shot Nadia twice in his living room in his house at Kelso, and then he had turned the gun on himself. It was shattering. In the days afterwards, piles of flowers appeared at the doors of both premises.

Today’s service was a chance to to process the shock and celebrate a beautiful life cut short.

“As Nadia died violently and suddenly is important for us to gather as a community and grieve together,” said the celebrant, Father Paul Devitt.

The cathedral was the appropriate place because Nadia was a regular churchgoer. Father Devitt pointed out the spot where Nadia usually sat on Sunday mornings.

Nadia’s friend, Barb McTaggart, read the prayer of St Francis of Assisi. Where there is hatred, let me sow love; where there is injury, pardon…

Another friend, Lee Illingworth, told us that her own youngest son and Nadia’s son Jordan had been best friends for three years. They’d both attended the Cathedral school. The boys had ridden motorbikes, gone swimming, played soccer and eaten at McDonalds together. Lee had first seen Nadia at the school gate wearing “Kylie Minogue hotpants and a boob tube”. She was a woman who took great care of her appearance, and was quite open about trips to Sydney for cosmetic procedures and hair extensions.

“She wasn’t bragging, she was just telling me in case I needed to get some hair extensions,” said Lee.

She spoke of Nadia’s generous spirit and care in showing her friends that she cared for them.

“Every time I see a beautiful woman I’ll think of Nadia,” said Lee.

David Swan, speaking on behalf of Judge Andrew Colefax SC, who was unable to attend because of illness, read out First Corinthians Chapter 13: And now these three remain: faith, hope and love. But the greatest of these is love.

Another friend, Christine Le Fevre, who runs the Bishops Court Estate boutique hotel, said Nadia had come into her life in “such an effervescent way”. Nadia had turned up to book her son’s Christening party, but stayed on to become one of Christine’s dearest friends. She was a “beautiful gorgeous girl” who lit up a room; she never forgot a birthday or other special occasion; she was radiant, beaming with life, a beauty on the inside as well as on the outside. She loved the finer things in life, like champagne and shoes and Paris. Christine and her husband David Swan had been in Paris when they got the news of Nadia’s death in the middle of the night. The following day, David went to the Somme as planned but Christine was in no mood for the battlefield. Instead, she spent the day shopping with Nadia, seeing things Nadia would have liked to see, buying things Nadia would have liked to have.

“She’s been taken from us,” said Christine.

Christine said she had taken all the flowers and cards left for Nadia outside Bathurst Real Estate office and was composting them ready for a memorial garden in her honour. The garden will feature a lipstick maple tree.

And then Christine turned her attention to the 62. She said that TV presenter Lisa Wilkinson had spoken out against domestic violence, and Nadia’s face was there on screen as she spoke.

“Nadia’s out there being remembered in our world,” Christine said. “We must stop this from happening.”

Barb McTaggart added her own memories of Nadia. The two women had met at the Health World gym. Nadia had shown a great talent for chatting, exercising and keeping up with the instructor at the same time.

Michael Buble’s “Home” and “Flying High” rang out from the overhead speakers.A team of beautifully dressed women – dressed in honour of Nadia’s dress sense – gave out tiny plastic glasses of champagne or sparkling mineral water. Father Devitt asked us all to be upstanding. He said we should stand partly so that we could drink a toast to Nadia, and partly because “we must make a stand against domestic violence.”A woman came along the pews handing out fresh long-stemmed white roses.And then we all spilled out onto William Street. Just a couple of blocks away, Elie’s Cafe remains closed. But Bathurst Real Estate will open its doors as usual tomorrow. And it was still a beautiful spring day.