Will the pen work here? Laguna Blanco, in the National Park. Oh, give me ex. book time! F**k!

Just a few minutes, only long enough to hear Get On Up, Sex Machine and to have a conversation about flamingos – why they are pink and why, in zoos, they require mirrors for their sex lives.

Tina has the best Spanish in the car. It’s windy and cold up here.

Taught to us by Figo, our driver, after the car momentarily failed to start.

Now gone back one hour in time. We were given a special leaf to chew which apparently helps with altitude sickness. I’m sitting next to a chewed, dried piece of it now. At the border officialdom centre between Chile and Bolivia there were no baños but there was a big old bus rotting into the dry earth. I mean rusting. Not even rusting really. Fading and dessicating. Anyway, there were no baños so the idea was to “go” behind that bus. It was stinking and horrible with mounts of turd of various ages & dryness and flapping bits of toilet paper held down by rocks.

At the dinner table at hour hostel at the end of a magnificent day where, after a very short time, I was able to completely join the mainstream experience. Figo, our driver, has an attachment which pumps out the moozik.

Lights out in a few minutes.

Conversation at the moment is about War and Peace. Has anybody read it? No. I volunteered that I’d read Anna Karenina but no-one responded to this. Then someone said, What’s it all about? I said, Russia, Crimean War. I said it confidently but but maybe I’m wrong about the C. war. Need to Google it.* 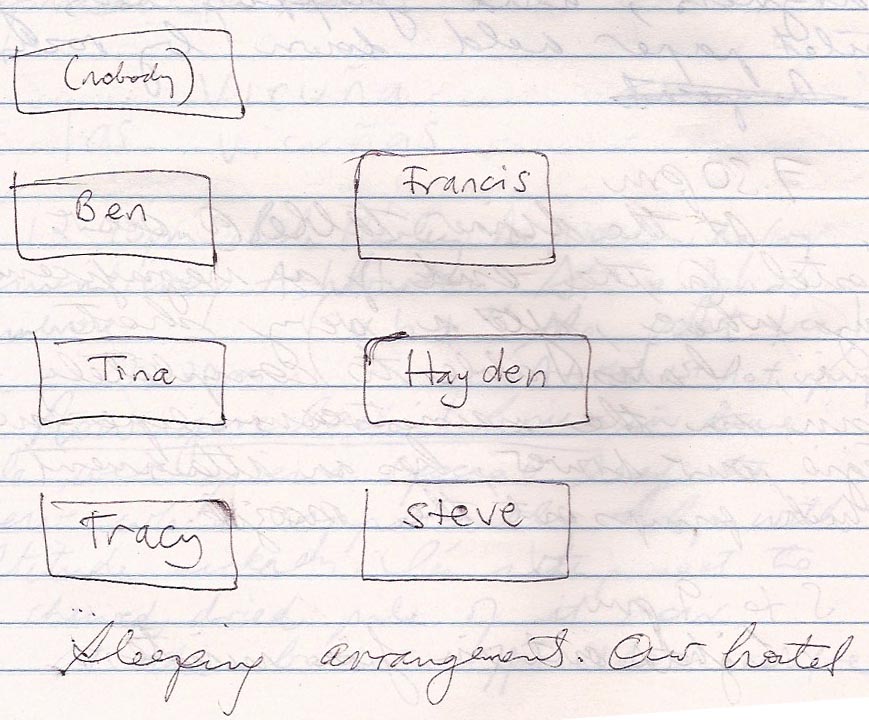 Our hotel has been made out of adobe. Lights should be out by now. They are not controlled by us. There is a single globe hanging from the ceiling. I’m under piles of blankets and Rosemary’s sleeping bag. These beds are hunks of rocks or concrete with a mattress and a pile of blankets. Today on our tour I saw concrete bollards marking the side of the road with a rock on top of each one. I said, Oh look, art! To me it looked sculptural and repetitive. Tina said: “If that’s art, so are our beds.” Ha ha – rokcs with something on top of them. I haven’t written this up properly but this will do for now. The room light has flickered but has not yet gone out. We Australians were all put together. Hayden and Francis are a young couple from NZ; the rest of us are Australians. It has been good to talk.

*Yup, wrong. According to Wikipedia, the novel is set in an earlier period.