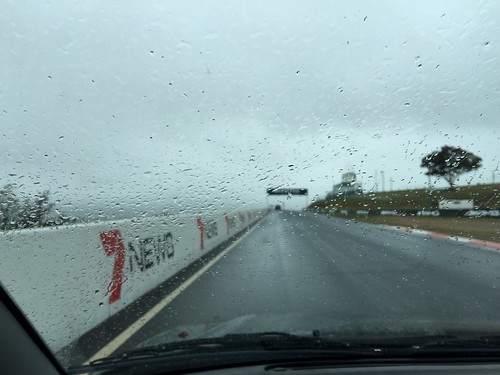 This blog post is coming to you from the midst of a polar vortex. That’s right, we are living through a weekend of weather that is visiting us from the Antarctic. It is cold. There is snow. (Note to my northern hemisphere readers: yes, we do think tiny scraps of snow are a big deal.) Actually, here in South Bathurst, it’s not anywhere near as enchanting as it is in surrounding districts, where the snow is staying on the ground, turning everything into fairyland. It’s just dark and cold and raining on and off. Today Steve and I drove to the top of Mt Panorama to take Bertie for a run. On the way up, we saw hundreds of sulphur crested cockatoos standing in a paddock, looking cold. They – along with their cousins, the little correllas – have been hanging around town for few days, some sort of cockatoo convention. Up on top of the mountain, we got out of the car and the cold air attacked my face, freezing my sinuses. It made me think of a winter in Prague, many moons ago, when I walked across a couple of suburbs to our soviet-era flat in the dark, in December, and my face just about froze off. (That was when I was with Steve the First.) Bertie leaped out of the car and bounded about, invigorated. I picked up five vintage ring pulls for my collection. Always rich pickings after it rains.

I live here, but these days I’m always cross-referencing back to Carnarvon, where I lived as a child and teenager. It’s so easy to do this, now. There’s a constant drip of information coming from the I Grew Up in Carnarvon Facebook group. Time collapses. In the middle of winter I can keep one part of my mind in the sunshine that pours down on the red earth and the glittering Indian Ocean; a place where snow is just an idea. As I write this, it’s 19 degrees Celsius in Carnarvon (it’s 3 degrees, here). At the moment Carnarvon is witnessing a mass break-out of native burrowing bees. The shire council has blocked off the road to allow the bees to do their thing. The Facebook group, made up of residents and ex-residents alike, is following along as Antoinette Roe gives updates on progress. These bees are new to me. I never knew them when I actually lived in Carnarvon. But I did know the bird flower and the chiming wedgebill (the “Did y’ get drunk?” bird), two local living things that are often reminisced about on the site.

I’ve been living here in Bathurst for over ten years. Gradually, I’m getting to know the plants and animals that live here. I’m actually on a forced march at the moment, having dobbed myself in to help organise an exhibition of local plants and animals for later this year. The other day, I went out to the launch of a new landcare group at Napoleon Reef, about fifteen minutes out of town on the road to Sydney. You turn left off the highway, follow the road to the end, and park. It’s a matter of walking down – quite a steep walk down – into the reserve. That day, cold but sunny, the white trunks of gum trees stood all around us. Aboriginal elders Dinawan Gerribang (aka Bill Allen) and Jill Bower performed a smoking ceremony and dabbed us all in white ochre to celebrate the group’s beginning.

With a little fire going, Bill said the smoking ceremony was a way of expressing yindyamarra. He said this Wiradyuri word means “respect, honour, go slow, be polite and be honorable about it.” He said this sort of respect was not just for each other but for “everything around us”. 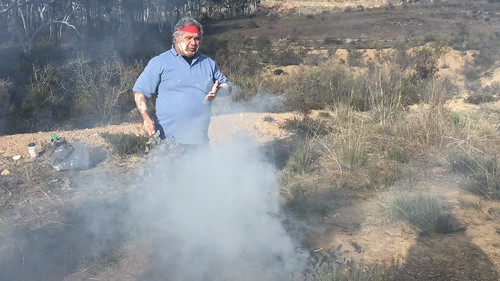 He said Europeans came to this land and saw timber and grazing land, whereas Aboriginal people were steeped in the idea of yindyamarra.

“That’s what people have to understand,” he said. “We had two completely opposing types of ideas on how to use the land.”

He said Aboriginal and non-Aboriginal people could try to work together by building a bridge. “That’s what the Bathurst Aboriginal Community Elders are wanting to do, is build that bridge.”

He said he preferred the word “bridge” to the word “reconciliation” because “there was never ever any relationship with each other in the first place. It was just, one lot was already here and the other lot come here on their boats and they just clashed with each other over the land.

“So, I can’t call it reconciliation. We’d prefer to use the term bridge- building so we get an understanding of each other so then we can connect, which is what a bridge does.”

As he used bunches of eucaplyptus leaves to create a thick, billowing smoke, Bill said it was important to do a smoking ceremony as you go into a new area in the bush. “It’s to show respect to the spirits, it opens your mind so you can see what’s around you.”

There were bittersweet moments in the ceremony, with reminders of a dispossession that wasn’t so very long ago and the vastly different socio-economic position of the small Aboriginal group standing behind the fire and the group of mostly white middle-class homeowners and landowners assembled in front of it. Bill said he loved to be on the land, but he didn’t own any. And then there was an old memory from school, of being chided for not turning up, for “going walkabout”.

“I say to people, well youse go walkabout more than I do because I can’t afford to go on holiday. You’ve got a big caravan you take it all up there wherever you go. That’s your little sacred site!”

He ended his speech by urging us to be more considerate of nature. “We want to take out all the resources and make it all for the now and make ourselves feel like we’re important more than everything else. Well, we are important, but we’ve got to remember that everything around us, too, is important.”

After this gentle lecture, we were invited to walk through the smoke and then to get three dabs of wet white ochre on the forehead. It was wonderful to walk through that smoke and to receive my dabs, so generously given. I’ll never really be a local here, but it made me feel so much more a part of this place.