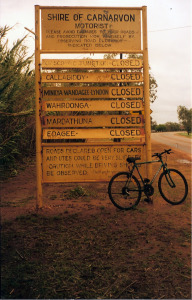 Riding around in Carnarvon during and after Cyclone Steve in March, 2000.

Today I got the bike out of the shed, wiped off the dust and cobwebs, pumped up the tyres, and got back in the saddle. My protective gear included a billowy long-sleeved shirt, sunscreen,  an old yellowed helmet and a flowery hat poking out from under the helmet. I wore a wrap-around skirt and sandals because it was too hot for jeans. In other words, I was neither a hipster nor a lycra cyclist but a complete dag. I didn’t care. I was only doing this because Steve’s got the car while he participates in the massive IUCN World Parks Congress in Sydney and its satellite events. That’s all very well but I had to pick up the box of organic veges that we have on permanent order from the Bathurst Wholefood Coop (I’m delighted to see that my green street cred is steadily rising in this post), something I normally do with the car. Until today, I hadn’t been on the bike since major surgery in May. I’m still a bit protective of my insides, even though it’s now months ago. Swinging my leg over to the pedal on the other side was slightly iffy – for some reason chemo left me with a stiff left leg and hip – but I managed it. And then, I was back on the bike! Hooray! Bertie had been watching all these preparations. As I slipped out through the temporary fencing at the back of our yard, he let out a mournful howl, an otherworldly sound of broken-heartedness. I told him I was only going to the shops. He gets clingy when Steve’s not here.

Mum will be here tonight – she’s on the Bathurst Bullet as I write this. She’ll be here for a week. We’ll have to walk everywhere, which can’t hurt. And it’s wonderful that we both still can.

In the meantime, here’s this inane novelty song, so familiar. I’d never seen this clip, but here it is, thanks to YouTube.