I’ve been sitting here doing my tax. After all the horror and magic of the past six or seven months, this is certainly a return to ordinariness. I have a pile of receipts on a spike, all relating to the whirlwind of work I was doing until January, at which point everything stopped. Teaching, video making – I handed it all over to others. I stopped generating receipts. I stopped having a taxable income. I was on Pause. But now, doing my tax, I feel the pause button has been released. I’m back on Play, if not Work (except for a tiny bit of online teaching). It feels … ordinary. I miss the magic, if not the horror. But I’m also appreciating the chance to get back to ordinariness, one tax receipt at a time.

Over the past week I’ve returned to walking Bertie the black Labrador. I’d been avoiding it because he is a bad puller on the leash, and that wasn’t going to do my tender guts any good. But now that the scars have healed, we’ve been getting back to what I call The Soccer Fields Way, which is: over the bridge to the Vale Road, turn left, down to the soccer fields, optionally over the metal bridge, optionally over another set of playing fields, and return. The other day, I even ran with Bertie, just a bit. Running is something else I hadn’t done since surgery. Nothing bad happened, so I did it a little bit again today. What about swimming, riding a bike? Yet to be tried. But I can feel them coming on. 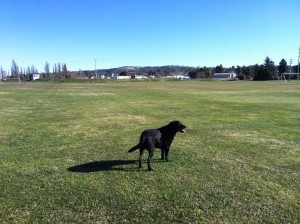 And then there’s the wider world. After months of focusing on my own stitched-up navel, it’s starting to crowd back in. Gaza. Syria. Planes being shot out of the sky. The trashing of the Great Barrier Reef. Closer to home, there’s something to celebrate:  the mayor of Bathurst is supporting the Aboriginal Land Council’s application to have the Indigenous name for Mount Panorama – Wahluu – formally gazetted by the Geographical Names Board. You can just make out Mt Panorama in the background of this pic of Bertie. Unfortunately, this has set off passionate opposition, with those against the co-naming saying it’ll be confusing to car race fans and they’re sick of being called racist (see comments on the Leave the Name the Same petition). Supporters of the co-naming (like me) say it’s time to widen the story to encompass not just 80 years of car races, but a culture that existed for thousands of years before that. The Mount Panorama brand is safe: promotions for the car race will continue to refer to Mount Panorama. And, far from confusing people, the co-naming will simply add to their knowledge. In June, when Australian basketballer Patty Mills was playing for NBA champions the San Antonio Spurs, millions of fans heard commentators talking about Mills’ Torres Strait heritage. They would have learned a little bit more about Australia and Australians from that. It could be the same with the car race: if  commentators mention the Wahluu name, even in passing, they’re enriching the world’s understanding of this place and its people. Unfortunately, the naysayers have garnered more signatures on for their online petition than the supporters have gathered on theirs. But the “yes” petition is gaining momentum. Note: You don’t have to be in Bathurst (or even Australia) to sign the petition! 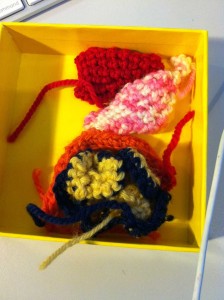 Meanwhile, I’ve been working on a tiny version of my crocheted guts. I’m going to present them in a small yellow box to Professor P, who along with Dr A, rearranged my insides so effectively. I’ve still got to poke in the dangling threads, stuff them and sew on some details. I’ll be talking about crafting my way through illness in a short  presentation at 3pm in Kandos on Saturday, August 16, which includes a screening of my doco Lost Arts of the 1970s. More info: gpollard@cementa.com.au

8 thoughts on “Life goes on”