Major extended family arrival today – three adults and two small children – so I’ll keep this brief. I say this like the busy person I was just three months ago. I’m not busy at all these days, but I’ve still managed to run out of time to get things ready. What things? That’s part of my problem: what things, exactly? I have a great sense of urgency combined with very little focus. Anyway, Easter’s history, along with the ghastliness brought on by my last chemotherapy session. Now it’s the eve of Anzac Day and I’m out of the drama of feeling utterly horrible and back into daily life in the trenches of cancer treatment. I can metaphorically (and literally, I suppose) play cards and learn French, as the off-duty Anzacs did between calls to go Over The Top. Actually I won’t learn French. Ever. Serious illness has relieved me of a whole lot of shoulds (learn French, read Ulysses). But I will crochet, because it’s really helping. 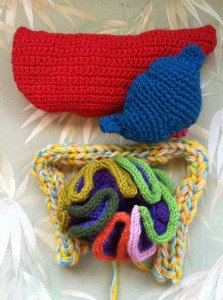 Here’s a pic of work-in-progress on a representation of my guts. Not to scale or colour, obviously. The bit I’m most proud of is the small intestine. Most beginner-anatomy representations of the small intestine don’t bother to show the mesentery, the curling structure that attaches the intestines to the back of the abdominal cavity and feeds them arterial blood (see pic of mesentery of autopsied cat). I’ve discovered that the mesentery is best represented by hyperbolic crochet, the same technique used to represent the Great Barrier Reef in the Crochet Coral Reef project. From small attachment points, the mesentery fans out, ruffles and folds back on itself, allowing the small intestines to do the same. Hyperbolic crochet is mesmerising and very relaxing.

I’m scheduled to go Over The Top again on May 13. This is when I’ll be opened up from sternum to pubic bone while two or three (upper GIT*, gynae-oncol and possibly colo-rectal) specialists work on extracting my two tumours. As I crochet my threatened guts I’m learning so much about them – what they are, where they are placed, what they do. I’ll be making two tumours, too. Not sure about the colours or how to make them look horrible enough.

6 thoughts on “In the trenches”