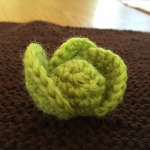 Today I’ve been crocheting a cabbage. It has a head and three green leaves; I may have to make one more leaf to make it look a little more cabbage-like. Lately I’ve made a kayaker, a few turtles and fish, a platypus and a blue damselfly (a blue dragonfly-like creature). These are all being stitched to a 60 metre (and growing) crocheted, knitted and woven representation of the Macquarie River stretching from Bathurst, to Hill End, Dubbo, Warren and beyond. This evening, at 5pm, we’ll be unfurling this “banner” at the Council chambers to no to a proposal to divert up to 10 megalitres of river water a day to a gold mine near Blayney. Some people will sing; others will hang more conventional banners painted by local teenagers saying things like DON’T ROB OUR RIVER; others will be holding home-made placards. Wiradjuri people, who have been here since time immemorial and call the river the Wambool, will be there too. Just now, I just got a call from an older man who said he would be there but he might be a little late, as his wife is infirm.

In the local paper today we’ve been branded as “emotional greenies” by Councillor Michael Coote, who is very cross at being bombarded with text messages. He feels we have been blessed by the gold mining company’s offer to take our water. The economic bonanza to follow will be like “winning the lottery”.

“As councillors we have to make decisions based on facts and not emotion,” Cr Coote said. “Let’s take the emotion out of this.”

The idea that Cr Coote is all about the facts and environmentalists are all about emotion is rather curious. Our case against the proposed extraction from the river is based on a cartload of scientific facts, all of which appear in Council’s own reports and pronouncements about the state of the local environment. Local temperatures are rising as climate change kicks in, and biodiversity is falling as habitat is destroyed. We environmentalists are quite aware of these facts, and find them devastating. Yes, devastation is an emotion. But it’s not a random or irrational emotion – it’s a congruent response to a set of facts.

Whether he realises it or not, Cr Coote is having some emotions himself. It would appear from the Advocate story that he is sick of the “scare campaign” by “greenies”. He’s sick of it! He’s not going to take it any more! He wants to get this whole thing over with by having Council vote in favour of the water sale tonight. That’ll stop those pesky text messages, and allow the river of cash to flow.

The fact is that we all have both minds and hearts. We all bring both to bear on our beliefs, values, opinions. It guides the language each side prefers to use. We say “water”; Cr Coote says “effluent”. It’s simply wrong for Cr Coote to say that he is being rational and we are being emotional. All sides in this are emotional.

While Cr Coote believes he is being factual about the river water sale, there is a fair amount of mythology – fantasy – at the heart of such an approach to the natural environment. The fantasy is that we can keep plundering our natural resources indefinitely. If there are consequences, they will be dealt with by unnamed, unknown people in the future, or downstream, or somewhere else in the world. To countenance this brings the possibility – perhaps just a whisper – of feeling bad. Best to retreat into a fantasy world in which “facts” can stand alone without being tainted by someone’s tears.

So, back to my crocheted cabbage. It’s true, Cr Coote, I’ve been feeling emotional about the river. As well as researching it and writing a respectable, unemotional submission to Council, I’ve been working off some sadness by making these little objects. The saying goes that history is made by those who show up. The suffragettes had a long procession of embroidered banners. We’ve got a long woolly river bearing turtles and cabbages. You might be just one person, just one cabbage – but together, we’re strong!

3 thoughts on “How to do history”