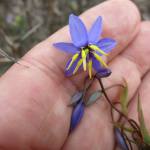 I’m not sure who I’ll be tomorrow but today, whether I like it or not, I’m Charlie. I continue to have some non-Charlie thoughts: My snapdragons in the garden out the front are failing to launch. They’re long and spindly, browned off in the heat, producing just the odd flower here and there. I was expecting them to look colourful and lush by now. Last night on ABC TV, Professor Brian Cox, the anointed  successor to Sir David Attenborough, celebrated the extraordinary, audacious human race, the species that went from the obsidian-headed axe to outer space in the blink of an eye, geologically speaking. We’re better than these guys, he said, smugly indicating the baboons in the background.

Sitting in the back of a van on the way to meet the returning crew of the International Space Station, he used a marker pen to write out the formula for gravity. Which is:

Racing over the frozen landscape of Kazakhstan to meet the returning spaceship, Brian Cox said he was glad Newton published his formula back in 1687 because it meant people didn’t have to start from scratch every time they wanted to get into outer space. By writing these things down, humanity has been able to info-share across the ages and gee, we just keep getting smarter and smarter!

But this morning I’m Charlie, and I feel it’s barely warranted to crow over our superiority to the baboons. I’m Charlie today because yesterday, men in balaclavas, armed with kalashnikovs and a rocket launcher, gate-crashed an editorial meeting in the offices of the newspaper Charlie Hebdo. Cartoonists and journalists were mowed down. You know the story. In the aftermath, people expressed their solidarity by saying “I am Charlie” all over social media and in rallies in Paris and London.

I know what it’s like to sit in an editorial meeting; to liaise with cartoonists; to go about a day in the life of a working journalist. Having it all explode in blood and carnage is, as the perpetrators intended, truly terrifying.

I’m also a white person with #firstworldproblems, living in the West, in a house with snapdragons out the front in a quiet street where the most egregious noise I’ll hear is the howl of a Malamute as it joins in with a distant ambulance, or the thumping of music when the neighbours clean their house on a Saturday morning. I expect to go about in peace, without being caught in crossfire or gunned down because I’ve turned up for work. I’m not personally responsible for the cycles of violence in the world. But I am Charlie, and Charlie, to some minds, represents the West and all the liberal freedoms and privileges available therein. A West that conquered, colonised and controlled the world and now expects to get a latte in peace.

It could be me in the firing line. Because I’m Charlie.

There’s no telling what might happen on account of one thing leading to another. You find a sharp sliver of obsidian and think it might add some oomph to your club. The next thing you know, you’re on the moon. You plunder and colonise the world in the name of God, and find yourself fighting the locals who are defending themselves in the name of God. There are reasons why murderous nutters get a hearing in certain circles. Those reasons can be found in history. As far as we know, it’s a law-governed universe; gravity works both here and in outer space. On this earth, the law of history is that if you’re the top dog you’ll be challenged, sooner or later, by the dog under you. It’s all there in writing.

But we prefer hubris over history lessons. We’ll study Newton on gravity but on conflict resolution, we’ll take our cues from the baboons.

A pause. A bit of a Google. I just found a review of a book about a herd of peace-loving baboons that turned their backs on violence.
If they can do it, maybe we can do it.

This is wild, this is brilliant. It cares not for its target audience.

This is what I like about the 1970s (maybe this clip happened in the late ’60s but its spirit didn’t really arrive in Australia until the early ’70s): things weren’t so pinned down. Popular entertainment relied on entertainers, not target market. The entertainer came first, not the vehicle. It’s why things are so empty now.

I’m working on teaching resources for a course called Write Simple Stories and it’s all about identifying the target audience first and going from there. I agree that this is a good course of action if one is writing a training video about how to operate a fire extinguisher. But it’s killing entertainment.