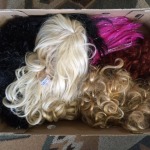 9 thoughts on “The new world in the morning”