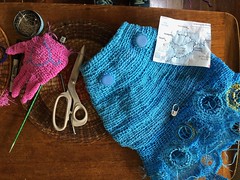 I’m crocheting a big blue Murray cod out of recycled baling twine. Anyone with horses, and anyone who has been hand-feeding stock through the drought, will be very familiar with the stuff. Starting out, I knew I’d need a lot of it. On spec, I rang a horsey business in Forbes, because I was going to be driving out there for something else, and asked if they had any blue baling twine lying about. Bullseye! First time lucky! I pulled up outside of a two-storey brick house on the edge of town, near the river. There were about eight horses in stalls out the back, and it had one of those back yards with a bit of everything in it – parts of machinery, old tins, building materials, the odd half-buried child’s toy. I knocked on the door. Silence. Try again. Wander around the back, noting two chained dogs watching but not barking. The horses watching, too. Note the large drifts of blue baling twine. Wonder if I should just start gathering it. Finally, a window opens on the second floor, and a bloke’s face appears in it. He explains he’s minding a small child so he can’t come down, but go right ahead. He watches me from the window as I gather up my treasure. It overflows my arms so I grab a large empty stock-feed bag and stuff the twine into that. I turn to go but the man in the window urges me on, clearly happy to be rid of the stuff. But I can’t take it all, there is just too much of it. I gather one or two extra bits to be polite and make my getaway. 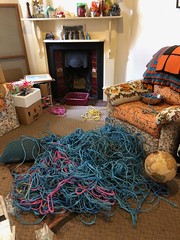 Hours later, I dump it all onto the living room floor. There’s a satisfying amount of hay amongst the twine and a nice farmy smell. There’s some pink twine as well as the blue. I snip the machine-made knots out of it, sort it by colour, vacuum thoroughly.

Way back in December I’d heard on the grapevine that polypropylene baling twine was to be this year’s Waste to Art theme, even though it hadn’t been officially publicised. So that was in the back of my mind when, as summer temperatures soared and stayed frighteningly high for days at a time, we got news of fish kills in the Murray Darling at Menindee. It felt personal. The Macquarie River (Wambool) that runs through Bathurst heads west and north until it gets to the Macquarie Marshes out past Warren, and these finally drain into the Murray Darling. Some of the water that runs through town here gets all the way to the mouth of the Murray in South Australia.

Rob McBride and Dick Arnold with dead fish at Menindee. Click the image to see the video on the Tolarno Station facebook page.

A perfect storm of factors – water diverted to cotton farms, nutrients running off farms, drought, high temperatures – created an algal bloom that killed millions of fish. The blue-green algae bloomed in the heat and then died as temperatures dropped, and in death it de-oxygenated the water. The fish drowned in their own river. A video of big dead fish held in the arms of farmers near Menindee went viral. Images of thousands of dead fish floating on the surface of the water turned up on social media and in the news. Giant Murray cod that had lived through drought and flooding rains for a century had finally been felled by human beings recklessly taking more from the river than it could give. Would the Murray Darling recover? Perhaps yes, to a point. But the future of the Murray cod is looking grim.

As a part of the River Yarners, I meet with my craftivist posse every Friday afternoon. Since late 2015, we’ve been knitting and yarning a representation of the Macquarie River/Wambool from its beginnings south east of Bathurst to its nebulous end-point across the Macquarie Marshes. I took my bright blue baling twine along to our next meeting, and started crocheting a simple continuation of our 80 metre-long woolly river. I had to split the twine to make it thinner and easier to work with, rolling it between my fingers to unravel what a machine had ravelled. My intention was to add lots of small dead fish. I’d enter this in the Waste to Art exhibition and then fold it back into our long woolly work.

But then the magic of anatomical crochet, the journey I’ve been on since my illness in 2014, began to kick in. What did a Murray cod really look like? I turned to Google images and there they were, pages of them.

I noted the big thick lips, the large mouth, the relatively small eyes, the mottled surface, the big pale belly that gets bigger bigger over the years, like a beer belly, the rounded, not pointy, shape of the tail. I started working on a big fellow, starting with the shape of the lips and working back. I thought I’d make a big fish and lots of little ones. But then my artist friend Karen Golland urged me to think about doing just one fish. So I’m making just one big fella, to stand in for its myriad peers. 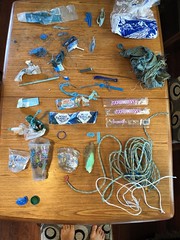 Along the way, I have become obsessed with blue plastic. On my walks around the soccer fields, alone now without Bertie the black Lab (who is now in eternal repose, so at odds with his personality, in the back yard between Taro the yellow Lab and Prince the tabby cat), all I can see is bits of blue plastic in the ground. I’m like a satin bower bird, attracted to the colour. Lots of lids from bottled water. Lots of Mentos packets and chip packets made of layers of plastic coated in a thin film of shiny aluminium.

The obsession has grown to encompass litter in general. After kids’ games over the weekend, the soccer fields are littered with clear plastic Slurpee and McDonalds cups, Zooper Dooper packets, plastic straws, soft clear plastic bags for ice bought from the service station, sports drinks, some with a good slurp still left in the bottom. So much to do with cooling and hydrating young human bodies, while the bodies of our fellow creatures, the fish, die and decay.

I collect some of it in a calico bag, channeling a lady we used to know as Old May in Carnarvon, who collected things from off the street and out of rubbish bins to add to her big calico sack. In my hat and oversized white shirt against the sun, and the calico bag bulging with rubbish, I look a bit mad. People tend to avoid my eyes.

At home, I wash my collections and try to sort them. Amongst the ordinary litter, I find bits of treasure: a tiny blue comb for a doll, hard plastic spoons in a beautiful translucent green, Nerf gun bullets, a whole golf ball with a split rind. My plan is to stuff my blue Murray cod with this rubbish (I’m washing it carefully and putting it out to dry). I’m tempted to make the rubbish more visible in and on the fish, to make the piece louder and more didactic. I want to stitch the Mount Franklin bottled water labels over it. I want to use the Slurpee cups to represent the cotton growers taking more than their fair share. But then I remember Karen’s mantra – just the fish, just the one fish. Do justice to the fish, its shape, its being. 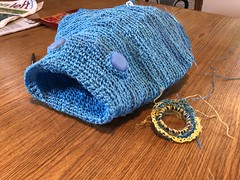 The size and shape of my fish is inspired partly by the image of Mr McBride holding the cod in the video, and partly by the length and width of my coffee table. I’m now about a third of the way along from the snout and I’ve already got a bit of the tail. But there’s a long road ahead, creating the body out of small stitches of single crochet.