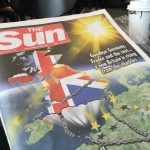 n Cheltenham when we heard the cry of a seagull. I looked up and there it was, wings outstretched against a momentarily blue sky. Chelt
enham is a long way from the sea, I said. Jane agreed the seagull was out of place. Cheltenham never used to have seagulls. But they’ve been coming over from Gloucester in large numbers. The people of Cheltenham, unnerved by this development, have been trying to get rid of them, poisoining any seagull eggs they find.

I’ve arrived in the UK in the midst of Brexit. I can’t help thinking the Brexiteers are trying to do something like what the people are Cheltenham are trying to do in relation to seagulls: get things back how they were. Impossible and I’ll-advised, especially for the seagulls.

Jane and I were in an Air BnB house in Oxford the night the Brexit vote was counted. I was still jetlagged from my flight across the planet. Jane couldn’t sleep; she stayed up listening to the radio. The news came through in the early hours and we were awake for it. Jane was devastated. I was very surprised. I’d assumed the vote would go the other way. I’d spent the day wandering around Oxford which was bristling with Remain posters.

Today I had tea at Paddington station in London with Sian, an Australian friend, and asked her if she’d been surprised. No, she said, because she’d just been in Wales, where every visible sign was for Leave.

The mood as the day wore on was very grumpy, a bit jumpy. London (Remain) was pissed off and apalled with other parts of the country. People were all talking about it, everywhere you went, people were discussing it. I’ve never heard ordinary people talk about politics so much in my entire life. A young woman sitting in the seat in front of me on the bus on the way from Cheltenham to London was whispering to her companion that she’d voted Leave but now felt she couldn’t tell anyone what she’d done. She felt bad about it. Her friend told her not to be ashamed of her vote, to stand strong and not be apologetic.

At Victoria station I bought a couple of newspapers and the young man who served me asked if I could explain the difference between The Sun and the Daily Mail. I daid they were much of a muchness and asked how he felt about Brexit. For him, Brexit was a vote on immigration, pure and simple. He was an immigrant himself.

When I got to my hotel in Paddington, three men were checking in. One was wearing an extraordinary outfit of skinny jeans and a jacket and a pleated dress under the jacket that came down to the knees. Sort of exactly half male and half female attire. Another hotel guest stared openly at him, trying to work it out. They three were off to the gay pride march. I went to my room and switched the telly on. At the gay pride march, someone had taken phone footage of people shouting angrily at Jeremy Corbyn, the Labour leader, for a bloodless, halfhearted campaign for Remain.

It’s clear Corbyn wasn’t comfortable with Remain, even though it was his party’s policy. Globalisation, of which the European Union is a part, has not divided its spoils evenly. The collapse of manufacturing in the UK, plus decades of neoliberalism, have thrown the traditional working class into the abyss. Some of us – like me – are flying around the world for our holidays. Others feel they have been consigned to the scrap heap. They’re quite right about that. But if that’s the problem, Brexit is hardly the solution.

I think of Lithgow coal miners. Lithgow is the next big town east of Bathurst, an old union town, a coal mining town. If Lithgow were in England, it would have voted Leave. If Lithgow had its druthers, it would mine coal forever. But that won’t happen, can’t happen, shouldn’t happen. The answer is not to go back, but to go out into unchartered, unknown territory.

Corbyn’s bloodless response is explained by his sense of solidarity with the English equivalents of the Lithgow coal miners. If they think Brexit is the solution, they’ve got it wrong. Corbyn has failed to explain that, to lead the way.

This is because there are real human beings on the receiving end of all this. Pilger and Corbyn may ascribe more noble principles – a defence of trade union rights, a cry for the safety net of the welfare state – but the real meaning of Brexit is powerless resentment parlayed into racism.

The world is a difficult place. Seagulls live in Cheltenham, men wear dresses. Slogans and symbols and a return to the past are not solutions.

What is England, this jewel, this sceptered isle (these words come back to me from Mrs de Beer’s English class)? In this hotel the breakfast room has some attractive crusty loaves in a basket. These are for display only. Next to the basket, the piles of pallid sliced bread that are actually for the eating. The Brexiteers are reaching for a fantasy, a basket of fake bread. And the immigrants, like the seagulls, are about to cop it.

Note: I’ve been writing this blog post with one finger, using my phone. This post is not quite what I had in mind but it’ll have to do for now. I’ve been having a wonderful time. Today I visited the William Morris gallery & enjoyed a couple of hours of pure arts and crafts love. I’ll save that for another post.