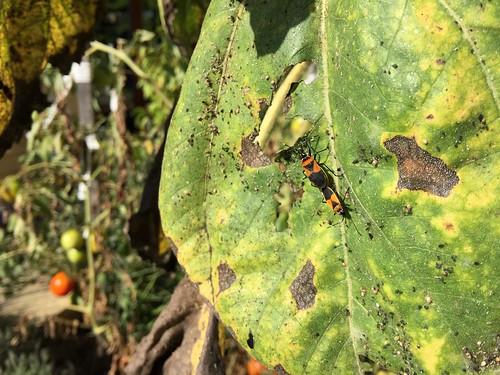 There’s a particular crispness we get in the air in Bathurst at this time of year. This morning I found myself at my sock drawer, because my feet were cold. This is right on cue. This is almost the last day of summer. On Sunday it’ll be autumn. The garden just outside the back door is now a messy tangle of growth and decay and impossibly juicy, sweet, tangy, big red tomatoes. The tall withering sunflowers throw jagged shadows against the fibro shed wall. Busy brown fairy wrens, tails sticking straight up or swaying from side to side, land on the giant brown leaves and take rapid sips. Sip, sip, sip. They’re sucking up the tiny insects that are coating the dying leaves. A couple of weeks ago we had a luminous red and green king parrot standing on the great saucer of the sunflower head, binging on the seeds. Orange-backed beetles join at the tail and walk around like Siamese twins. There’s the hum of bees visiting the small yellow flowers of the straggly thin-leaved rocket that has gone wild, filling in all the spaces. The bees are wearing little yellow pantaloons of gathered p 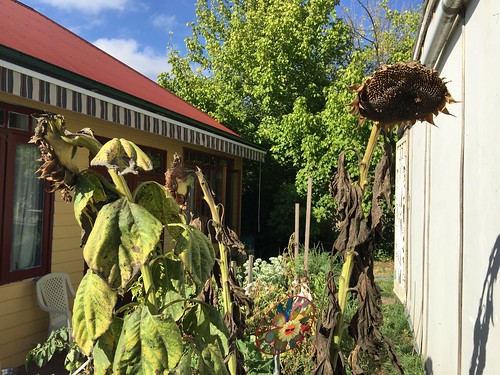 ollen. A wren lands on the windmill my nephews got at last year’s Easter show. She goes for an unexpected ride as it twirls under her weight. She rights herself with a bit of a flap and flies off stage right. I think back to the end of last winter when I planted seeds and tried to keep the seedlings alive in a wonky plastic greenhouse from Bunnings. Just the tiniest cotyledon leaves, then. And now – this tangled mass attracting swarms of insects and birds that you can harvest for lunch.

I’ve been running around like a chook. As the year got going, it picked me up and took me with it. Last year it left me alone, and I did my own illness thing. People shuffled themselves around me and my illness. Now I’m back in this general stream, out and about in town, sitting in committee meetings, work meetings. It’s all about talking things up, talking things down, opposing, celebrating, organising. People persuade me to get involved in their projects; I persuade others to get involved in mine. We’re all in there, haggling it out. So this morning it was good to just stare at the garden.

My Afternoon Teal went off brilliantly. The oven had conked out, so Larissa, up from Sydney, whipped things up in her giant brown mixing bowl and took everything next door to bake. She got the timing absolutely right, going back and forth, pulling things out at exactly the right time. Meanwhile Steve and I gave the house a once-over from front to back that still really only scratched the surface of a year’s dirt and dusty corners. Then, suddenly, everyone was there, eating cupcakes, drinking tea and bidding on the merchandise. A teal pencil sharpener, worth $2, sold for $30. It went on like that. My sister Deb, her husband Bernie and their two kids, Max and Joey, were enthusiastic auctioneers, thoroughly fleecing all present. We made a thousand dollars in one afternoon for Ovarian Cancer Australia. More money has been coming in since. This money will go into medical research and support for those who get this stealthy disease. In order to nurture and protect life. All life on earth has to end – we bloom and droop and die – but it’s nice to stretch it out a bit. 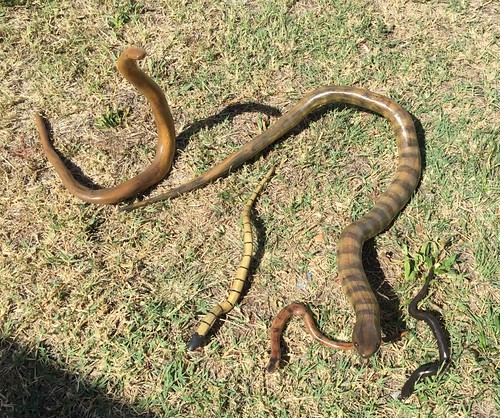 Today is overwhelmingly a marking day. I still haven’t quite finished. The last possible moment is tomorrow morning at 9am so I’m not going too badly (considering it’s not yet 6pm the day before, ahem). In between the marking – all done on the computer these days; my red pens sit idle – I’ve been having a couple of other adventures.

The first was a call-out to have a look at some snakes. They were arranged on the grass verge just outside Vi’s house opposite Centennial Park. As I approached with Bertie, I could see a cluster of people gathered around what looked like a posse of live snakes in the grass. I wondered if Bertie would react to them, but he wasn’t so easily fooled. Instead, he gamboled over to meet the people (Hi! Hi! Hi! Anything to eat?). Leif, who made the snakes, finds smooth slim branches down by the river. They remind him of local snakes. So he takes them home, carving, painting and polishing until they look extremely realistic. They’re all anatomically correct: tiger snakes, red-bellied blacks, eastern browns. I asked him if some of his snakes (he has over 50) could go on show at the 200 Plants and Animals exhibition that I’m helping to organise for BCCAN this year. He said yes, as long as we looked after them.

Vi got to know Leif when he rebuilt the brick wall at the front of her house, which, very early on in the life of Bathurst, was an inn. While he was working on the wall, Leif collapsed. Vi called the ambulance. For a while Leif was completely down for the count. They did CPR on him, pressing down on his ribs.

“I went to the other side,” said Leif, standing there with his snakes at his feet.

“It was light and warm. It wasn’t a tunnel, it was more of a rectangle. Maybe it’s because I watch a lot of TV. It was lovely. Then I heard them say, ‘He’s breathing’ and I woke up. I said, ‘Don’t wake me up, I’m having a nice dream’.”

I’m glad he came round, because his snakes will make an excellent contribution to the exhibition. 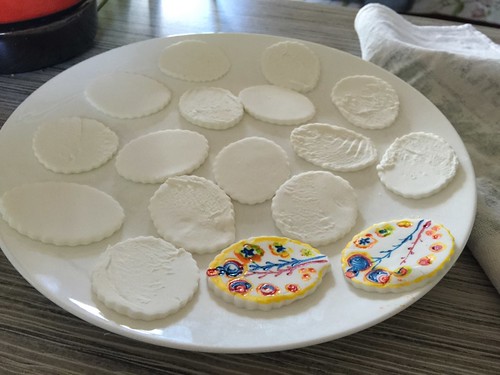 Then more marking, interspersed with attempts to make decorative cupcake toppers out of fondant icing for my Afternoon Teal on Saturday. I can see why people do whole TAFE courses to get these skills. My teal “ribbons” look disgusting. They’re lumpy and very unribbon-like. They look like a child’s efforts with Play Doh. I feel better about my fondant ovaries. I was able to use a cookie-cutter to get the basic oval shape; then it was just a matter of using food colouring marker pens (yes! there is such a thing!) to draw on the details. It’ll be interesting to see people actually eating them.