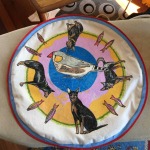 I’ve finally finished Larissa’s cushion: a zebra finch in the middle (she’s doing a PhD on animal personality); her four kelpies around the edges with decorative guppies (Larissa has also studied the personality of guppies). All rendered in Hobbytex. The blue and red edging is old bias binding tape found in a sewing box inherited from her paternal grandmother. That’s one for the Completion files. Completion feels good.

And there were rich pickings on the ring pull fields today. I went up to the top of Mount Panorama late this afternoon. It was all grey and gloomy. The earth was damp with fungi rising. Some hoons had been through, leaving two great circular patches of rough dirt. The grinding motion of the tyres had turned over the top centimetre or two of topsoil, bringing long-buried ring-pulls to the surface. They lay there in the poor light, ripe for the picking. I felt like one of those birds that follow tractors, going for the worms.

I struggled with my bad right knee. I bent down and rubbed at it and tried to ease the kneecap into the right spot. That seemed to help. I told Steve about the knee book I’m reading. It’s the memoir of a man who buggered his knees cycling up hills and eventually found his own way to a cure. His thesis is that a lot of light movement is better for bad knees than heavy intermittent workouts to build up the quadriceps. To support this he quotes a study in which three sets of teen rabbits were treated for bad knees in different ways. (The rabbits did not show up in the lab with bad knees; they were given them. Under anaesthetic, they each had small holes drilled directly

into the cartilage.) When they woke up from their operations, the rabbits were either in a plaster cast (immobilisation) or rigged up in a contraption that lightly, continuously, bent and unbent their bad knees. A third group was given heavy, intermittent exercise (simulating a regular workout at the gym). The group that had their knees gently bent and unbent for them did a lot better than the other two.1 This was discovered by killing all of them and pulling apart their tiny knees to examine the rates of healing of the cartilage. I told Steve about this tragedy and he said, “Well, you want good knees”, as if to say, “To make an omelette you have  to break eggs.” Or: “Cartilage research has its costs and benefits.”

Earlier in the day, I rested my knee on the coffee table as I spoke to my old school friend, Tricia Fong. She asked what the thing with the green dresses was all about. Oh yes, the Invisible Bodies performance, only a week ago but now rapidly receding in my mind. I told her about it, and she said the teal dresses had made her think of the fund-raising stalls we’d had in primary school. For one of these, Mum had made tiny teal dresses for Barbie dolls. These were simple affairs involving a bit of shirring over the ample plastic bust creating a gathered skirt. I said I couldn’t remember this at all, but as I said it, the hint of a possible memory began to awaken. These are little gifts,  bits of my own life given back to me. Which brought us around to toffees, also sold on these stalls, which I do remember. I used to love making them. Tricia said she remembered how, at my house, we added a pinch of cream of tartar, but that her own mother didn’t have any in the house and toffees made there weren’t as good. So after our phone call I went on a cream of tartar research mission. Cream of tartar is the acidic crystalline substance that spontaneously forms during wine making. In cooking it can stabilise whipped egg white and it prevents crystalisation in toffee. Yes. Our cake-stall toffees were the clearest, purest red, like thick glass.

2 thoughts on “Ring pulls, rabbit knees and cream of tartar”