I had to go back through the doughnut hole yesterday. It’s the big white machine that talks to you (“Breathe in and hold.” Pause. “You may now breathe normally.”) while you are shunted in and out like a tin of tomatoes on a conveyor belt. I really didn’t want to go. I drove on auto-pilot to the Russell Street Medical Centre and was trying to park when I realised I was in the wrong spot. I should have been at the PRP Radiology clinic in Bentinck Street. The business of getting to this appointment was taking me back to that chaotic day in January when I had a CT scan and then innocently went off to my GP who assumed I knew about the results and started talking about two tumours as if they were old news. Traumatic. It was only yesterday that I realised how traumatic this had been. Fortunately, yesterday’s scan was easy peasy. The needle went straight into my vein without any mucking around, because I knew to drink gallons water beforehand. As the radiologist pumped dye through the cannula I felt, without alarm, the weird sensation that feels like you’ve peed yourself (you haven’t). Before I knew it, it was all over. He was packing me up and sending me out and saying the CD would be waiting for me at the front desk. I told him I did not want the CD because I didn’t want to be tempted to look at it before my specialist sat me down to talk about the results. When I go to see the specialist tomorrow (she’ll have picked up the results online), I’m going to say, as soon as I walk in: “I don’t know the results of my latest scan. Be gentle with me.” Later, once everything has been settled, I might go and pick up the CD. By the time I look at it my abdomen will have been radically re-arranged so it won’t matter any more.

So, tomorrow I’ll be getting some important information. I’ll find out if my three chemo sessions have successfully shrunk my tumours, and I’ll find out if I’m well enough to be operated on next Tuesday. All very daunting. Fortunately, I’ve been able to throw myself into crochet! I’ve almost finished my guts. I’m going to stitch them into a brown cushion that will just look like any old brown cushion on the sofa until you unbutton it. I’m dithering about whether to take my bag of guts with me to the specialist. I’m wondering if my surgeon will be impressed or just think I’m wasting precious time in the consulting room. I guess it doesn’t matter either way – my woolly guts have helped me enormously. In making them I was able to learn a lot about my internal organs, say a provisional goodbye to some of them and enjoy the take-your-mind-off-things absorption of a pleasant, creative task.

Today is World Ovarian Cancer Day. The big message is to be aware of the subtle symptoms of ovarian cancer, which usually try to pass themselves off as something more benign, like indigestion, constipation, a feeling of fullness after eating, and so on. Most women are only diagnosed at a late stage, once the cancer has spread because they and their doctors spend months (or years) working through other theories. While my own cancer is called “primary peritoneal cancer” it’s exactly the same as ovarian cancer (it’s just that the origin is in cells attached to the peritoneum, not the ovary), so I consider myself a member of Team Teal. 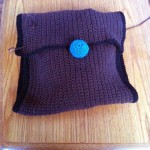 It just looks like a brown cushion with a teal button. 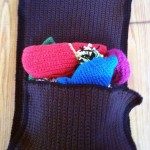 Open it up, and you find a woolly collection… 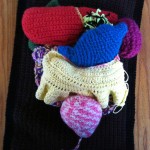 The yellow frilly bit is my representation of the greater omentum. It hangs from the bottom of the stomach and acts like a little protective blanket over the intestines. The pink and white thing is the uterus. It’s way too big, especially in relation to the tiny large intestine. I used a pear pattern as a model, and I didn’t realise how big the finished “pear” would be. 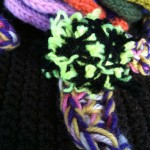 This is how I’ve made a visual representation of my 5cm bottom tumour. It’s in black and a sort of flouro greenish-yellow. It’s made up of straggly bits, like a bad pom pom – representing bits of cancerous material that threaten to drop and spread. The bottom tumour is in the Pouch of Douglas between the uterus and rectum. There’s nothing sexy about ovarian cancer. 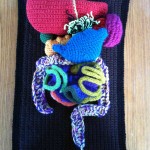 The uterus, bottom tumour and omentum have been removed, as they are likely to be during surgery next week. This shows the position of the first tumour which sits between the stomach and liver. 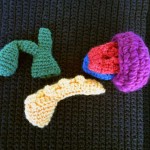 The spleen and gallbladder were made to patterns by Sarah Louisa Burns, a New York actor who has a quirky little shop on Etsy. The pancreas (I know, a suspicious looking beast) I designed myself! https://www.etsy.com/au/shop/AnOptimisticCynic

17 thoughts on “Once more into the doughnut”