I was nine on Thursday. What a lovely round number, three times three, not yet in double digits.  Earlier this week, I started getting slightly anxious, knowing that Wednesday would be a blood test and Thursday would be finding-out day (I’m now having six-weekly blood tests to make sure the cancer is good and gone). It was made worse 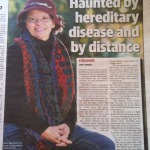 by the fact that last Sunday, I’d suddenly appeared in the Daily Telegraph. I’d spoken to the journalist, Jane, in July, and when the story didn’t go in over the following couple of weeks, I’d concluded that it wasn’t going to happen. But it did, finally, on Sunday, with a great big photo. I looked frankly ill. The pictures in the online version are not so bad, but in the printed newspaper I looked eyebrowless and sickly. And Jane had used the spooky phrase “fighting for her life”. All of which was a true account of the facts, facts I’d been talking about to all and sundry (including strangers following along here on this blog). But having someone else tell my story – losing control of the telling of it – was somehow confronting and depressing. The only possible antidote was craft. I could have picked up the crochet hook, but I felt like something more absorbing, more eye-straining than that. 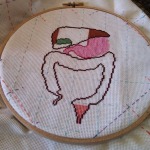 It had to be cross stitch. I downloaded the pattern for a set of guts, found a piece of suitable fabric and a pile of tangled embroidery thread and threw myself gratefully into the grid. One, two, three, four, five stitches across, then a diagonal move up the the next row … In this way I got myself to the waiting room and then into the chair beside the doctor’s desk. That’s where I finally got the news that my CA125 level was sitting nicely at nine. Nine! Earlier this year, the numbers were through the roof (like, nearly 3000). A relief, yes, but by now the the addiction had kicked in. I had to go straight to Lincraft in Parramatta afterwards, to wander around the aisles and seek out Number 20 tapestry needles.

On Parramatta Road, heading home, I saw the fabulously non-euphemistic Butcher Restaurant. Seeing this Butcher Restaurant has been a part of my blood-and-guts experiences this year. I realised I was feeling healthy and hardy, well able to withstand the horrors of Sydney traffic. 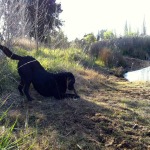 And back to Spring in Bathurst. The pink blossoms up and down the street have given way to wine-coloured leaves. Magpies are swooping. A sulphur-crested cocky was squawking with its beak shut, not wanting to drop a bunch of grass for a nest. We have one pink rose on the rosebush at the front of the house. Now that it’s warmer, Bertie’s back to swimming in the river. My seedlings are starting to grow their first true leaves, ready to plant out after the last frost (which of course is never really the last frost).

This morning I saw my first seasonal hoon right here in Torch Street. A white car roared to the end of the street and back, Ford flag flying. The driver was full of beans. He waved at me as he went by. Next week: the car race.