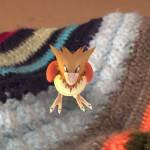 Writing this post… I’ll just keep the app running, okay? The phone is sitting on a clever little stand I made out of a piece of plastic packaging, and a non-slip sock filled with lentils. I wedge the phone between the plastic and the little bean bag snugs itself around it. I think I could make these for Etsy. Anyway, where was I? With the phone propped up nicely against the … buzz…. wow…. a Pokemon? YES! Oh, it’s just a Pidgey. Pidgeys are so BORING. They just look like … like pigeons. The other day I was walking along the street and saw a group of crested pigeons and I felt an inner buzz, that little spike of addictive energy and then I realised I couldn’t (or shouldn’t) catch ’em all because they were actual pigeons. And I realised I had it bad.

Pidgeys are boring, but it’s important to catch them so you can level up. I’m now at Level 16. So I grind through my Pidgeys (this is called “Pidgey grinding”) hoping all the while for something more rare and interesting, like a Bellsprout. Bellsprouts might not be rare in other parts of the world, but they’re very unusual in South Bathurst. I reckon I could crochet a Bellsprout. A quick Google. But other people have already done that. And other people are already having fun with Pokémon Go as addiction.

I confess I have found myself lurking near the controversial Evans statue in the town square, which has become a notorious local Pokestop. The scene was dark and cold, lit only by street lamps and the red glow that lights up the war memorial. There was a group of teenage boys just over there … and me. We did not acknowledge each other. We were there to do what we had to do.

But it’s not all just pidgey-grinding with me, I hasten to add. A few other things are going on. My agent (yes! I have an agent!) has just sent my novel (my novel!) off to publishers, so I have to sit around with my fingers crossed & get Bertie to cross all his claws, which is difficult for him to do. Bertie would be a useless Pokémon. Combat Power of about 8. He works best as a Lab assistant lying patiently on his lambskin rug behind my chair. And I’m still working on my PhD research proposal, which means reading up on the agency of nature and critical plant studies, which brings me back to the Bellsprout. We think of nature as dead. Animals are dead meat; plants might be alive but they’re vegetative, which has negative connotations. What if we felt the world as a living, thriving, thrumming thing, which is actually what it is? A thing full of myriad things all with their own lives, their own work? That’s what I’m exploring in my PhD; how we might become more alive to the more-than-human world. How do we make it interesting enough to stop fucking wrecking it? As I walk down Torch Street, I’m alive to the vibrating possibility of Pokémon flitting about in augmented reality like shimmering dragonflies. There’s this humming other world that I can enter and play with. As a child I did this with ants – I’m talking real ants, here, the ones that have an ant-smell – watching them walk in lines, talk to each other with their feelers, carry a crumb. For my PhD, I’m exploring how my crocheted guts became a way of interacting with my barely known and threatened organs. I’m exploring the hand-made, but I can also quite excited about the possibilities of augmented reality games as a way to get modern children interested in the more than human world. Locally, we could have a blackthorn pocket monster and a purple copperwing butterfly and the ant that tends its larvae. Kids (and adults) could catch em all, have fun and engage with the barely-seen nature that lives here with them.

Bzzzt. There’s a Weedle! Darn, I’m out of Pokéballs.

One thought on “My name is Tracy, and I’m a Pokémon Go addict”