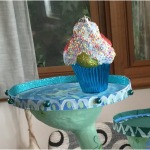 Colours. Some of my life is in pink and grey, the colours of the galah; some of it is in the red of outback earth and some of it is in teal, the colour of the awareness ribbons for ovarian cancer. I have an ambivalent relationship with teal. Sometimes I’m happy to be part of Team Teal, hosting fundraising afternoon teas for cancer research. Sometimes it’s a colour I don’t want to see. When I was in London in June, a woman in a striking teal sari walked past in a sudden shaft of summer light that broke out from behind a cloud. I don’t want a fucking omen. Fuck off. I was miserable for a while, convinced I was in for it all over again.

But I wasn’t. Back in Sydney, my routine checkup was all clear; the specialist shifted my checkup intervals from three months to six months. After that, yearly, and after that… you’re back out in the world with everyone else.

That teal sari wasn’t for me. 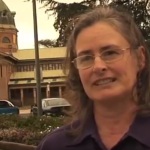 It must have been for Sue, my cancer buddy. We were diagnosed at around the same time, and compared notes. We were friends before we got sick; she was a long-time colleague of my partner Steve. Not long after Steve and I got together, we popped in to see Sue in her house in the Blue Mountains. She had three gorgeous little boys, triplets that were everywhere at once. Steve threw them on to the sofa, one after the other. They ran back, wanting to be thrown again. Sue struck me as amazingly calm in the midst of the whirlwind.

We were in overlapping environmental circles. She came to Bathurst to give a talk about the Transition Towns movement. We chit-chatted on Facebook about climate change and wind farms.

When I was diagnosed with primary peritoneal cancer, a variation on ovarian cancer, she sent a message:

Hi Tracy. Wanted to let you know I’m thinking about you & Steve and hoping for the best. Also, you wouldn’t believe it but I’ve just had a pelvic scan myself this week – I have a “complex ovarian cyst” which my doctor seems slightly (but not overly) concerned about. Having a CT scan next week and seeing a surgeon at Westmead the week after. I’m trying not to feel worried – no history of cancer in my family, but surgery is never fun.

Reluctantly, though, I had to admit her to the club. Our CA125 levels were “through the roof”. We started chemo, both trekking from our homes to Sydney for treatment (she at the Chris O’Brien Lifehouse at RPA; me at Westmead). We lost our hair, started wearing beanies. Got our dates for “debulking” surgery. Looked at the stats on ovarian cancer. Not good. Very not good. I kept thinking about her children, the three boys (Kalang, Milo and Tallai) and their older sister Kittani.

After surgery, our stories began to diverge. When I woke up – complete with colostomy bag and half my guts out – I heard the magic words: “We got all of it.” Wow. But for Sue, the news wasn’t so good. They’d had to leave some behind – to take more tumour would have killed her on the spot.

We both went back on the chemo treadmill, me for “mopping up”, Sue for holding the beast at bay.

She came to my Afternoon Teal fundraising event in February 2015, and I went to hers at the gorgeous old Paragon Cafe in Katoomba. I went back to teaching. For Sue, being ill became more-or-less her full-time job. It was wearing.

I’m in pain most days and every dose increase of painkillers just means more sleepiness and fatigue (not to mention nightmares & nausea!). I can’t drive and I struggle to do basic household tasks.

But she was still keeping a hand in as an active citizen. From her hospital bed at the O’Brien centre, she held a spontaneous working bee for The Colong Foundation for Wilderness. She urged us all to support her boys’ team (the Migrating Wombats) in the Trek for Timor. And she celebrated an enormous achievement: seeing her boys through to their 18th birthday.

When she announced on Facebook that she was back in Katoomba for “palliative care”, it was still shocking, despite all I knew.

Thanks Tracy. I know you will carry on the awareness raising for us Tealers. I’m okay now that I’m back in Katoomba. Love to you and Steve. I know he will update old work colleagues where appropriate. Look out for the published research on BGB-A317 down the track.

She was signing off. But I still thought there was perhaps a little bit more time. I was going to reply – at least with a “hugs” emoticon – but got distracted and the next thing I knew, there was a message from Sue’s phone, but it wasn’t Sue’s voice in the recording. It was her ex-partner Wyn, the children’s father, who had been at her side through all of this, asking me to call him back.

Goodbye Sue. Thank you for all you gave the world while you were here sharing this little blue planet with all of us – human, plant, animal, rock, sea and sky. Go well Kittani, Tallai, Kalang and Milo and their extended family. And go the Teal!