Over on the other side of the continent and half way up, a mile long jetty reaches out into the sparkling Indian Ocean. Thousands of stories are held on those creaking timber boards.

Dad is sitting in the car in the main street, having just arrived from a year-long stint on a dairy farm down south. He notes an Aboriginal boy with a fish almost as big as he is, slung over his back, going into the Port Hotel. When the boy reappears, sans fish and presumably a little money in his pocket, Dad asks where he got it. The boy points in the direction of the One Mile Jetty.

Did Dad walk out on that mile-long jetty by himself, or were we – Mum and my sister Deb and I – all in tow? I think he went alone. It took no time at all to land the big one. I imagine him now, a man in a striped shirt and stretchy black swimming costume, carrying his fish all the way back to shore. 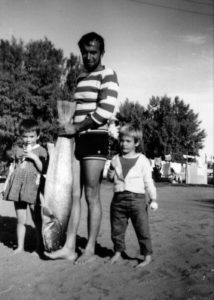 Mum took a photo of Dad with Deb and I standing either side of him, each holding an ice cream cone. In pride of place in the centre there’s the fish, taller than five-year-old me, its nose balanced on Dad’s bare foot to keep it out of the sand, tail held firmly in two hands.

We stayed on because of that fish. We stayed on in the little town between the red desert and the blue sea with the great bowl of blue sky overhead. The air was thick with insects; the bush thrummed with life; little brown birds hid in acacia shrubs and called out in a circular, taunting trill: Did y get drunk? Did y get drunk?

The One Mile Jetty became as familiar as our own backyard. We’d push an old pram full of fishing gear out across the old hardwood planks, over the tidal mud flats and mangroves to the deep blue-green sea that slapped on the pylons. You could lean up against the old shed out at the end, to get out of the wind; or you could stop fishing and clamber down to secret places underneath, to get closer to the water and study barnacles.

The fish were easy to catch. I learned to distinguish desultory nibbles from the thrill of a good hard tug. As a nine year old I could land, kill, gut and scale a fish. Returning home, our two grey cats would be waiting impatiently for us. We’d fry and eat our fish for dinner. The jetty was part of our pantry.

Earlier this year, Mum and I walked out on it together, decades after that day with the giant fish. We smelt the air again, and heard the slapping of the water on the old pylons, and remembered.

For Tom Day, a man of an earlier generation, the jetty was piece of vital transport infrastructure, the docking place for weekly visits from the state shipping line. From the earliest days of the Carnarvon township until the early 1960s, the only regular transport in and out was by sea.

“It’s part of our history,” he told me by phone today. “We used to travel to Perth on the state ships. It’s an icon of the town, and it’s the only timber jetty left in the north.” A mural on the Civic Centre in town shows the scene at the end of the jetty when a ship came in: a kaleidoscope of movement and colour, people and animals and things. Over the years visitors, townsfolk, shearers, sheep, wool, food, mail, fabrics, bananas, newspapers and magazines all came in and out of town this way.

Once the road was sealed all the way from Carnarvon to Perth, semi-trailers took over from the ships. The jetty’s new life as a drawcard for fishing and tourism began.

And there is a darker note in the jetty’s history. It was from here, between 1910 and 1916 that Aboriginal people, many in chains and handcuffs, were forced on the boats that took them to the infamous lock hospitals on Bernier and Dorre Islands.

But now the future of the jetty, with all its interwoven layers of history and personal stories, is in doubt. Consultants hired to assess the condition of the jetty and report on maintenance requirements took the unusual step of requesting that it be closed immediately due to safety concerns. If money can’t be found to repair it, the closure will be permanent.

The jetty’s decline has been a long time coming, hastened over the years by a couple of devastating fires lit by vandals. But an army of volunteers has worked tirelessly to care for the jetty, raising funds for maintenance and driving tourists out and back on the little “coffee pot” train.

Tom Day, now the chair of the Carnarvon Heritage Group, said he refused to take a “defeatist” view. “If you believe in something you need to stand up and say so,” he said. As we spoke, he was in the process of organising a public meeting in town to show community support to save the jetty.

“We’re talking to people in the city about how we might progress getting some funds to repair it,” he said. “We’ll get one shot at this. If you think we should rip down part of our history so be it, but I think it needs to be saved.”

The Carnarvon Heritage Group is running a fund-raising campaign to save the jetty. Find out more here:

6 thoughts on “Don’t let these stories wash away”