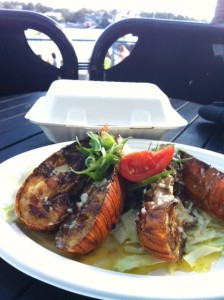 Today one of my doctors, Professor H, asked me what I’d had for lunch yesterday. I told him I’d eaten a Moreton Bay Bug and chips at the Sydney Fish Market. He was impressed. So impressed that he said I could go ahead and have chemotherapy tomorrow. Not exactly a welcome reward. Haven’t I just had massive surgery? Is my abdomen not a maze of tracks and scars and strange plastic protuberances? Why would you want to soak my remaining delicate organs in a bowl of poison so soon? But I’d eaten chips, and had no ill-effects. This was proof that my guts – including my halved pancreas and clipped stomach – were fully functioning and perfectly capable of withstanding a new onslaught.

Professor H said I was going exceptionally well; I was in the best possible place I could be, considering where I’d started out. I’d recovered quickly from surgery, I had no visible tumours, and the next three cycles of chemo should knock out any microscopic cancer remaining. I started seeing the light at the end of the tunnel. I’m over the big hump in the middle; I’m on the home run.

So, it’s chemo again tomorrow. It’s daunting, but doable. I’ll be back at Westemead at 8.30am in the morning, offering my vein to the drip machine.

In the meantime, I’ve been out of hospital for a week, staying at Larissa’s in Newtown with Steve and my dear friend Lisa B, who flew out from the UK. From a mostly prone position at first, I gradually got around a little more each day. Then, yesterday, I went on a proper outing that had nothing, absolutely nothing (visibly, anyway), to do with illness or hospitals. It was instead a moment of sea and sky and piles of fish and seagulls and boats. (Impossible to turn off the part of my brain fretting about overfishing of the world’s oceans, but I managed to keep the volume low.) Again I marveled at the extraordinary vibrance of the world just going about its business. We bought Moreton Bay bugs and chips. As soon as we opened the carton, a seagull stole a chip. We got wise and left the lid down, only lifting it a little to get the next chip. I ate a whole bug in garlic butter. Here you go, pancreas, a little challenge! It passed with flying colours.

Meanwhile, I’ve been working on my crocheted guts, reworking the collection to reflect the new arrangement. Should be ready to post some pics next week.

8 thoughts on “Chips and bugs by the water”