My life, at the moment, is small. It’s taking place mostly inside the house and a little bit in the back yard. There are some walks with Bertie. Not much is happening. I feel a like a soldier who has returned from the war and is slightly baffled by the rituals of civilian life. Out in the back yard there’s a smooth rectangle of bare gravel. Steve’s building a new shed. Earlier this year Steve spent an evening doing the owner-builder course online and over the past couple of weeks various blokes in high-vis vests have come and gone. I spied on one of them, watching as he got his thermos out and the newspaper and had a nice morning tea in the sun. There has been a minor stress-out over whether the bobcat man’s truck was interfering with parents dropping off and picking up kids at the childcare centre over the back fence. Out in the bigger, wider world, there’s the ebola virus, the slaughter in Gaza, fleeing Yazidis, a second Malaysian Airlines plane going down with all souls. I’ve been taking a break from the bigger, wider world. It’s mainly just me and the house and yard. I’m alive, and noticing that it’s yellow flower season again (daffodils and wattle) and the vege garden is a wasteland of tall grass and weeds.

This morning I watched a Robin Williams clip about being alive. It was for Sesame Street back in the ’80s. How do you know you’re alive? You’re alive if you can answer yes to these three questions: Can you breathe? Can you eat? Can you grow? He tested the theory on his shoe and concluded that it was not alive.

To breathe, eat and grow. To be alive, unlike Robin Williams’ shoe. It’s small, it’s everywhere, and it’s amazing.

On Saturday I’ll be getting out of the house and going to Kandos (a tiny town about an hour away) to do a short presentation as part of a craft forum. I’ll be taking my crocheted guts for a show-and-tell. And next Wednesday I’ll be going back into the doughnut for a post-treatment CT scan. I’ll report on these next week.

Raining, raining. Painting the inside of the windows with PENETROL – great name! Will paint the outside when it gets warmer. Squirting DERMOTIC into Bertie’s ears – another great name! Listening, while sanding and painting, to a whole day of BBC world service. Again and again, reporters stumbling over or at least hesitating over the name of the Georgian luger (lugeman? luge person?) wiped out on the Vancouver track. And a beautiful Punjabi Indian Scottish poet … pause for quick switch over to Google … by the name of Imtiaz Dharker who repeated the line how beautiful you are … can’t find it now… but I have found tiffin boxes. I love the word tiffin. 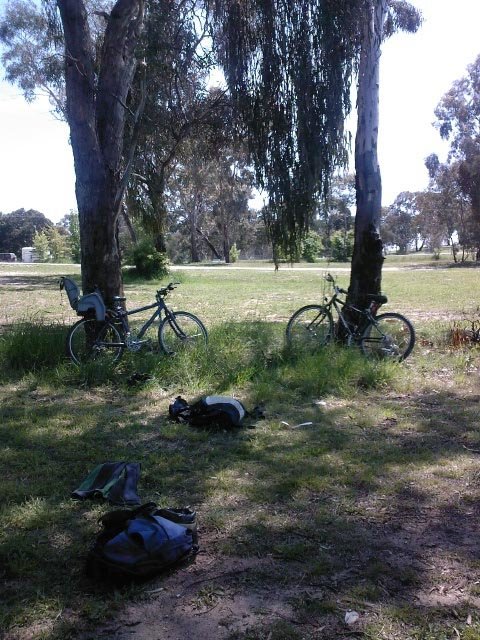 13. I write this to the sound of Taro snoring on the carpet behind me. She smells of wet dog. Steve and Rosemary took Bertie, Taro and Jasper to the river for a swim while I went on gardening and starting the cooking so we’d get to the movie on time.
14. I’ve been yanking out couch grass.
15. The two vege garden beds are empty and waiting. Empty except for some valiant sage that kept on keeping on regardless of drought and frost. I dug out the beginnings of sunflower seedlings. The sunflower from two summers back had produced seeds and they’d fallen to the ground and now they were going to grow into a new sunflower crop but I dug them out because I was taking a take-no-prisoners approach (except for the sage).
16. I notice that the potted strawberries have survived absolute neglect and the tulips have struggled to put out a warped flower but the geraniums are utterly dead.
17. The succulents in the front garden are flowering in orange and purple. These pigfaces (narrow gauge) have been green and healthy for well over a year; only now are they doing the flowering thing.
18. Kirsty and I rode along the bottom of Mt Panorama, along Boundary Road, through some open land where people camp, have sex, take drugs and light fires, then through a housing commission area and back on to Browning Street. I turned left at William Street and Kirsty, Marcus and Enya turned right.
19. At Boundary Road an enormous kangaroo was standing up on its hind legs looking at us. Enya spotted and and gave chase. Kirsty screamed at Enya.
20. For my twentieth thing, I’ll give an update on the renos. Everything has ground to a halt, but the work is not finished and we have not moved in. I’m amazed that Steve is not going nuts about this the way I am. I’m completely over it. It’s been a year now, and that’s enough for me. We need to have a retaining wall built and some pavers laid. After that, we can have the floors sanded and polished (or oiled) and only then can we officially move in with the furniture and everything, and only then can I move in to my new office and start work on this room, which will become the guest bedroom. And we’re buying and installing an awning, but the awning guys are going to want a flat paved area to work on so the real snag with everything is the laying of the paving/building of retaining wall. After this, I’ll have done renovating for this lifetime. I don’t ever need to do this again.

Bing! Home again after a few days doing Christmas with rellies. Bought a Pictionary game at Borders in Tuggerah with Christmas vouchers. I love Pictionary! We played one game; I’m itching to do more but the box was too big for me to cart home by train and bus, so it’s still in Wyong. Finally got home from my Long Trek (with a stopover to see Atonement at Broadway Hoyts with Larissa) to find that Steve had already started on the renos. We’re officially renovating! What a relief! We’ve been moving towards this point for about three years. In the “wasted space”, Steve’s name for the nameless room that could be called a dining room, we now have a bit of actual rubble on the floor, and on the walls, some lurid green ’70s wallpaper under a layer of sweet green retro floral tiles. All this was revealed when Steve peeled back the ’70s wood paneling. Interesting – three layers of ’70s decor. It appears previous tenants tried painted hardboard first, then the wallpaper, and then the tiles, before covering the lot with the paneling. What fun, what fun! Steve’s at work today. I’d barely put everything down before I ran out to the shed to find a small axe. Then I went at the sweet green tiles. They dropped and smashed satisfyingly to the floor. I’m now moving back and forth between cleaning and reconstituting the outside dunny (I love it and I’m not sure I want to give it up) and dumping my tile rubble into the big green skip in the back yard. The dunny is your classic Australian piece, celebrated in many a chooks and chokos joke. I imagine it originally housed a pan toilet before moving up to the porcelain and bakelite beauty that is there now. Layers of flaking paint in various shades of green and blue, with evidence of bold red paintings on concrete and timber. The nails that would have held newspaper for wiping bottoms. The wonderful old latch. Stored memories of the trek into cold, cold nights to this little room lit only by wavering candlelight. Spiders in corners.