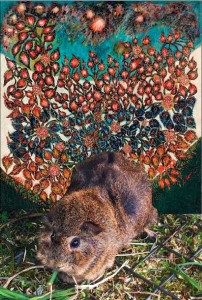 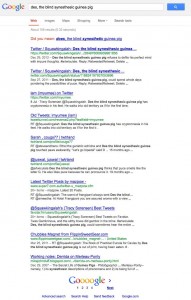 I haven’t enjoyed it. My procrastination is harrowing. However, I have done the following things:

I’ve broken in to Kirsty’s place to let out Elsie Tiger (cat), having accidentally locked her in last night.
I’ve spoken to guinea pigs.
I’ve eaten breakfast at Kirsty’s house – oats, nuts, an apple, cinnamon, soy milk – in the company of Elsie Tiger.
I’ve lain down on the carpet in the living room of Kirsty’s house. Elsie was also lying down and instead of getting up to walk over to me, she looked into my eyes and dragged her body over to me because it just seemed somehow important that we should remain spread out on the carpet. I should not expect more of a day than that.
I’ve had a look at the flowers on Taro’s grave. Big strong feisty zinnias. I looked at the pinkish purple one with a ring of star-like tiny yellow sunflowers and thought, “This is a flower from central casting”.
I’ve spoken to my black Labrador.
I’ve put a load of towels through the wash.
I’ve washed my hair.
I’ve chopped up rocket, basil, celery, parsley and chives out of my own garden and eaten them with tinned chickpeas and last night’s leftover veggies, for lunch.
I’ve mooched on the internet. A lot. The Twitter word of the day is “futilitarian”. Mum has finally worked out how to make a comment on Facebook. She’s moved beyond the simple “like” click to a full-blooded two-sentence comment. She began this comment with the word “Facebook”. That’s funny.
I’ve stumbled randomly around on the Internet, reading about how a boy named Abraham committed suicide with his webcam on, viewed by fellow users of the Internet including another boy from India who began making frantic calls to the police in the US with his Dad’s phone. He was not taken seriously. On YouTube I played The Hollies’ He Ain’t Heavy, He’s My Brother and was blown out by the words, supernaturally powerful words sent out into the world in a pop song in 1970.
I’ve made a card for Mum’s 73rd birthday, which is tomorrow. I stuck a picture of a dog over a blank card with a cutesy picture of kittens.
I’ve glanced at the latest CNN notice to appear stealthily on my iPhone: the United States has decided not to jump off the Fiscal Cliff.
I’ve read some of Gary Snyder’s The Practice of the Wild. I went into a swoon over a paragraph with this sentence in it: “Without conscious device we constantly reach into the vast word-hoards in the depths of the wild unconscious.”

I’ve given in to the urge to nap. The phones (landline then mobile; mobile then landline) went off twice and I kept my eyes shut and said, “Napping”.

This list is a work-in-progress. I’ll add to it as I think of things.

Flowers for Algernon (short story) – has stayed with me all these years.

Up a Road Slowly, Irene Hunt

Five Little Peppers and How They Grew

I’m waiting impatiently, I’m going to explode – Tiny Tim was apparently going to explode, but that was with sexual tension – I’m going to explode because I want to START. I want to start whatever this Penguin/Varuna Scholarship project is. I think I’ll hear more about it next week, after the Adelaide Writers’ Festival. This interview with Markus Zusak reminds me of the ray of light. That I write anyway, regardless, no matter what.

Happy New Year!* So far so good for me, as I continue to spend some hours sitting under the awning reading books, glancing up from time to time to watch the tomatoes grow. One book I’ve been looking at is Bertrand Russell’s In Praise of Idleness, written a few years before the Second World War. He outlines an idea that used to be popular but is now well out of fashion: that technology would liberate us all from long working hours. Everyone would be expected to put in, say, four hours a day and the rest of the time would be spent in leisure. Bertrand’s ideas about leisure didn’t include computer games (they hadn’t been invented yet) but did encompass some of the higher-order pursuits of human existence: reading, music, art and conversation.

As we know, things didn’t work out the way he was hoping. That’s because his ideas were based on a flawed premise: that once our basic needs were met, we’d ease off on our frantic work habits. The fact is that our “needs” keep shifting to encompass more and more stuff. Stuff like the Wii, a computer game that gets you on your feet, burning calories, as you hit a virtual tennis ball. Why the virtual tennis ball? Why not an actual tennis ball? Meanwhile, Mum and Dad are working overtime to make sure the kids have a Wii (and everything else) and when they finally get a bit of leisure, they feel that reading, art or even conversation are way too hard and all they can cope with is another cop show on telly. All of which adds to the sum total of carbon emissions, but there’s no time to think too deeply about that, because there’s so much to do!

We’re still on the treadmill, but there is a continuing disquiet. This was clear in the movie Avatar, in which the idea of development at all costs received a big hiding. In fact, it had its ass whupped, to use the language of the bad guys in the movie.

Thanks to Judy Walker for filling in for me in the weeks before Christmas. If you feel inspired to help make the world a more sustainable place in 2010, BCCAN would love more members!

* This is the text of the BCCAN column written for Bathurst’s Western Advocate to be published on Thursday, January 7 2010.