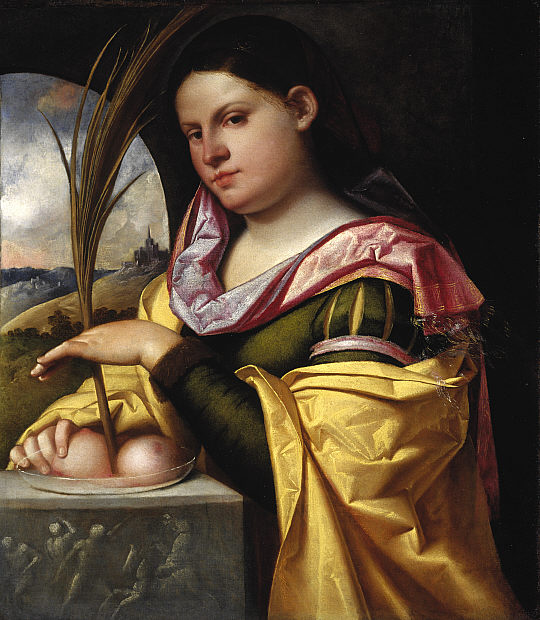 I now have the breasts of a Barbie doll – smooth and nipple-free. Actually at the moment they look very post-operative, but I can see how lovely and symmetrical they’ll be once I recover. The other day I discovered temporary tattoo nipples that one can add from time to time, as needed or wanted. Or I can get a tattoo artist to create an image with a three-dimensional look. Above, I’ve embedded a picture of St Agatha, patron saint of breasts. She is traditionally depicted carrying her excised breasts on a plate. I’ve now completed the final surgical state of my prophylactic bilateral mastectomy, otherwise known as chopping one’s tits off in order to avoid breast cancer. As I’ve explained in previous posts, I’m a carrier of the BRCA1 gene mutation. My sister, aunt and three cousins have all had the breast or ovarian cancer associated with this gene, so I decided to get in first. A year ago, I had the big surgery – both breasts entirely removed. I was left with a couple of saline pouches that would be gradually inflated to create two skin pouches capable of holding permanent silicone implants. My breasts were duly pumped up by a local physician; the other day I returned to my Sydney breast surgeon for the silicone implants. He has done a magnificent job. Now I’m hot and itchy and irritable as I lie around the house recovering. I had envisaged a serene few days on the couch but this heatwave is nasty and we don’t have air conditioning and bleat, bleat, bleat. At least I have nice new breasts in the making.