I’ve just arisen from the sofa, where I had a glorious two-hour nap (2pm to 4pm) all snuggled up in a pudgy doona listening to the rain patter endlessly on the roof. I thoroughly enjoyed this interlude and only feel a little bit guilty about it. It was a bit of mental time out from the great pile of things I should be doing/could be doing. I’m going around with this pile stacked on my head like a woman in Africa carting water or a girl in a grooming and deportment class. It’s nice to sometimes just shake my head, stand to one side and let all those titles (the books of Marking, Reading Serious Things, Writing Serious Things, Organising Stuff) fall to the floor. And step over them and lie down.

Besides the doona/sofa combination I do love a bit of craft. Craft is the gift that goes on giving. I have no professional credentials in craft. I’m a naive craft artist, like Grandma Moses was a naive painter. I do it the way it’s done in middle childhood. With gusto and lumpiness. 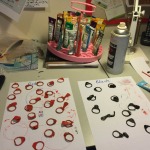 Over the past few days I’ve returned to my 2015 Waste to Art entry (deadline at the end of this month). I’ve had the Hobbytex out to paint my collected vintage ring pulls. I’m painting two reds to every black to make up my series of carbon dioxide molecules. These are hanging from the framework of an old macrame pendant lamp, bought off eBay a few years ago for the Lost Arts of the 1970s exhibition. I skinned it down to its skeleton, saved the wooden beads and threw away the dusty layers of thick, cream synthetic cord. All those hours of finger-straining work, unraveled, hacked up, dumped in the wheelie bin. Sorry.

Hobbytex paint, as some of you may know, is pungent stuff. This is pure petrochemical twentieth century toxin. To revive the almost-hardened paint in vintage tubes, I’ve been twisting off the nibs and dribbling in drops of thinners. Hobbytex thinners are the most extreme thinners imaginable. Virulent. Approach in full body gear. They work beautifully. The paint softens and glistens, forgetting its age, instantly reverting to its pliable, dazzling youth.

Hobbytex is so cool, I’m amazed it has never been hipsterised. If the company could just rework itself for a new age – like Tom Jones did, finding a new audience among the children of his original fans – then there might be a way for it to survive. Hobbytex’s soul sister, the paint-by-number phenomenon in the United States, has had something of a revival. And colouring-in for adults is big at the moment. But no. The Hobbytex company appears to be sticking to its stolid dagginess (bless its cotton socks). I fear the day they finally do what I did to the macrame pendant lamp shade. 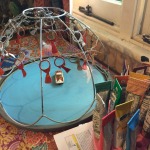 Anyway, I’ve used up a bit of my precious Hobbytex on a found toy car to create an impression of the Marlboro livery of Peter Brock’s famous race winner. It will sit under the dome of the skeletal lamp shade, representing the contribution to greenhouse gases of the internal combustion engine.  It’s all coming together, slowly.

In the meantime, I’m slogging through a project initiated by my friend Fiona Green, called Invisible Body. I say slogging because I’ve had to drag myself through it the way this person drags a cat who does not want to go for a walk on leash. Invisible Body will be a ten to fifteen minute performance during the Bathurst chapter of the Sydney Writers Festival. Three of us will read out pieces about our own bodies and perform things, on stage, physically in front of people. This is where the dread comes in. I’m happy to write, I’m happy to read things out, I’m happy to do bits and pieces on video that can be edited later but I’ve managed to avoid doing live theatre since about the age of 14, when I was a fairy in a pantomime put on in the Carnarvon Civic Cente. All memory of this performance has been lost without trace and even the building it happened in has long been demolished and replaced. That’s how much me and live theatre are not a thing. I’m doing this project out of an idea that it’ll be good for me and maybe for others (I’ll be talking about my illness and surgery, so it counts as an awareness activity). It’s good to stretch out of my comfort zone and participate in original theatre being created in my own town. That’s what I’m thinking. What I’m feeling is Reluctant Cat on Leash Being Dragged Across Floor. If I can just get on top of doing the skippety hops in time with the others (skippety skippety forwards, skippety skippety back) without losing it on the backwards skips, I might feel better about it. We’re giving two performances at the BMEC on May 22 and 23. 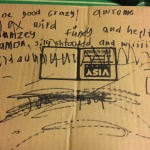 Just looking through the pictures I’ve taken over the past couple of weeks. So much going on! I particularly love this piece of creative non-fiction by Damon, young friend of my nephews, who was here for one night during the school hols. Pure Kerouac, I think.

2 thoughts on “Back on the Hobbytex fumes”